Declaration Of Peace In Afghanistan Signed By Islamic Scholars At Mecca

Kabul: Diplomats and leading officials from Islamic organizations on Friday praised the historic “Declaration of peace in Afghanistan” conference for paving the way for a solution to the long-running crisis in the war-torn country.

The conference, hosted in Mecca on Thursday by the Muslim World League (MWL) under the auspices of Saudi Arabia, brought together for the first-time senior Afghan and Pakistani scholars, along with government ministers from the two countries, in an effort to help bring about reconciliation among the people of Afghanistan. The declaration was co-signed by the Minister for Religious Affairs Dr. Noorul Haq Qadri and Afghan Hajj, Guidance and Endowments Minister Mohammed Qasim Halimi.

The participants offered their support for negotiations between the warring factions in the country and rejected all acts of extremism. “This historic announcement reflects the great efforts made by the Kingdom (of Saudi Arabia), as the current president of the Islamic Summit, and its pivotal role in reconciliation among the parties in the Islamic countries,” said Dr. Yousef Al-Othaimeen, secretary-general of the Organization of Islamic Cooperation (OIC). 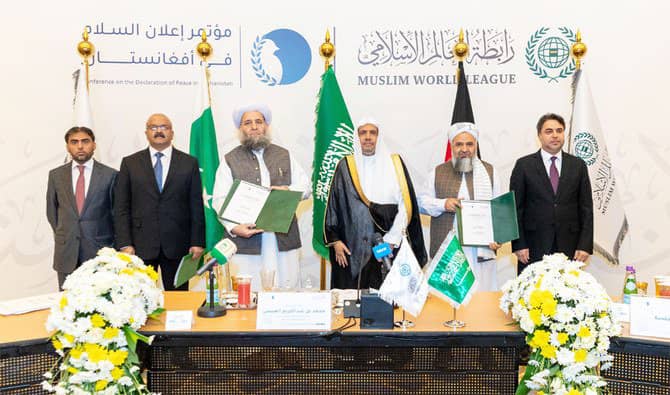 He added that he values the work of the MWL that led to Thursday’s declaration and an agreement to find a lasting and comprehensive solution that will support the process of peace, reconciliation, stability, progress and prosperity in Afghanistan.

Sayed Jalal Karim, the former Afghan ambassador to Saudi Arabia, told Arab News, “The peace conference was very fruitful for peace and stability in Afghanistan. It came at a very good time that will help to further strengthen relations between Afghanistan and Pakistan.”

Meanwhile, on the other side of the peace front, The Indian Ministry of External Affairs (MEA) on Friday elaborated that India has in fact opening up channels with Taliban and that it supports peace talks in the wake of US forces pulling back.

Indian MEA spokesperson Arindam Bagchi said, “We support all peace initiatives and have been engaged with several stakeholders including regional countries.” The move marks a significant shift from New Delhi’s position of not engaging with the Taliban.

The remarks come as there were reports that India is opening up channels of communication with Taliban factions and leaders, including reportedly Mullah Baradar. Bagchi added, “Our relations with Afghanistan are historical and multi-faceted. We have been engaging with Afghans across ethnicities. As a friendly neighbor, we are concerned about peace and security in Afghanistan and the region. We support all peace initiatives and have been engaged with several stakeholders including regional countries.”

It is pertinent to note that the Indian External Affairs Minister participated in the inaugural ceremony of the Afghan talks held in Doha last year. A senior official delegation attended the talks in Doha. In the recent past, India has had visits by multiple Afghan leaders to India, and vice-versa.