Kabul: Amnesty International, the human rights group, called on countries and organizations to support the Afghan government as the COVID-19 cases in the country surpassed 10,000 in early June, according to the World Health Organization (WHO).

The statement drew attention to Afghanistan’s urgent need for adequate oxygen supplies and access to Covid-19 vaccines. “These latest figures are of grave concern,” said Zaman Sultani, South Asia Researcher at Amnesty International. “It’s clear that the country has been hit by the third wave of Covid-19 and without urgent international support to contain this surge, the situation could quickly spiral out of control.” This comes even as the Ministry of Public Health (MoPH) recorded 1,647 new COVID-19 cases with 78 deaths in the past 24 hours on Tuesday. The total number of cases now stand at 94,919, while death toll is 3,761. 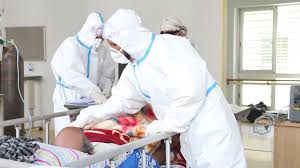 Afghanistan, which is home to 39 million people, currently has around 2,000 oxygen concentrators and 1,063 hospital beds for Covid-19 patients, according to Afghanistan’s Ministry of Public Health (MoPH). Forty percent of the population in Afghanistan is already allocated a vaccine under schemes covered by COVAX and from international donors such as the World Bank, however, only 641,295 doses were administered as of June 8, according to WHO.

The country received just 968,000 vaccines from the Indian Government and the COVAX facility. This is enough to fully inoculate just 1.24 percent of the population, according to Amnesty. China also provided Afghanistan with 700,000 vaccines, but an exact date for when the next batch will arrive has not been confirmed.