Kabul: Clashes and counter-clashes between the Afghan government security forces and the Taliban are intensifying across districts in the country.

In Daikundi, two members of the uprising forces have been killed and another was wounded in clashes between security forces and the Taliban in the Patu district of the province. Naqibullah Malistani, security chief of the Daikundi police said that the Taliban Red Unit forces launched an offensive on the Patu district center at 10am on Monday; but they failed to take control of the district center.

According to the Daikundi police official, the Taliban decided to take control of Patu district on Monday night. According to him, based on preliminary information, 12 Taliban insurgents were also killed in Monday night’s clashes.

The security chief of the Daikundi Police Command also said that there were still sporadic clashes between security forces and Taliban fighters in the area. According to Malistani, a number of people in district, including residents of the Tamzan area, have fled their homes and the Taliban have moved into residential areas. He said that the people of these areas are somehow cooperating with the Taliban and about 600 families have left their areas and the Taliban have settled in them.

Malistani added that the security forces are still trying to maintain the areas they control; but it is up to the military council to decide whether they want to launch a purge operation to drive the Taliban out of the Tamzan area and other villages in Patu.

Meanwhile, army sources in the northeast say that at least ten villages in the central Baghlan district of Baghlan province have been cleared of Taliban fighters as a result of a commando operation.

Abdul Hadi Nazari, a spokesman for the 217th Pamir Corps, said that the operation was launched last night (Monday), as a result of which the villages of Mirwais, Sarak Haft, Sarake Hasht and Chamkala were captured by security forces. Nazari also said that the public highway from the Sugar factory area to Do Saraka area of the new city of Baghlan Markazi district has been cleared of the Taliban and security forces are present in the area. 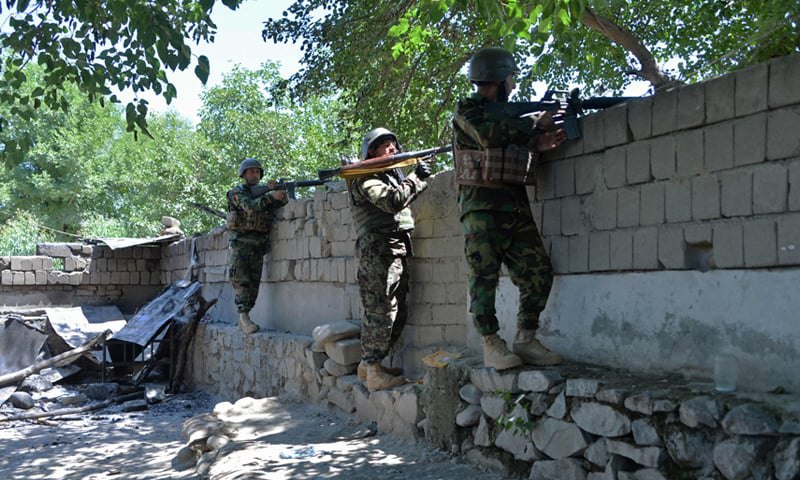 According to him, three Taliban fighters were killed and two others were wounded during the operation. About a month ago, parts of the Baghlan Markazi district, including the cleared areas, fell to the Taliban.

In other news, Ghulam Hussain Naseri, a representative of the Kabul people in the House of Representatives, reported the incursion of Taliban fighters and armed nomads into the Spichah area under the Kajab valley in the central Behsud district of Maidan Wardak province. The member of the House of Representatives, who also lives in Behsud district, said that there is currently fierce clashes underway between the defense forces and the Taliban and armed nomads.

Naseri, however, did not provide specific details about the casualties of the two sides involved. A large part of the Kajab Valley belongs to the Hisa-e-Awali Behsud district. Armed nomads engage with locals every year in the spring to gain pasture and infiltrate parts of Kajab and the central district of Behsud. According to local sources, in some cases the Taliban also collaborated with the nomads and launched offensive attacks.

Meanwhile, local sources in the east of the country confirm that a polio vaccination campaign worker was killed in an attack by unknown gunmen in Khogyani district of Nangarhar province.

Jan Mohammad Sahebzada, head of the polio eradication program in the east of the country, said that the incident took place at 7:30am on Tuesday in the Chamtala area of Khogyani district. Sahebzada added that another employee of the polio vaccination campaign was injured in the attack by unidentified gunmen.

Unidentified gunmen also attacked polio vaccination campaign staff in the Cheknurio area of the PD7 Jalalabad, central Nangarhar, on Tuesday morning, injuring two staff members. In addition to these attacks, two employees of the polio vaccination campaign were injured as a result of another attack in the PD3 of Jalalabad city. The attack was also carried out by unknown gunmen.

So far, no individual or group has claimed responsibility for the incident.

Hussain Mujahidzada, a member of the Sar-e-Pul provincial council, also confirmed that the district had fallen. This is the fourth district to fall to the Taliban in recent days.

With the fall of this district, only Balkhab district and Sar-e-Pul center are under the control of the government. Security sources also describe the situation in these areas as fragile. Sar-e-Pul province has six districts. Local sources warn that the province could be handed over to the Taliban if the security situation in the province is not addressed.