Kabul: Turkish President Erdogan laid out the conditions for it to secure the Kabul airport, stating that besides US “diplomatic, logistic and financial assistance,” Ankara is also looking for Pakistan and Hungary’s involvement in the new mission in Afghanistan following departure of US-led NATO troops.

Erdogan, while speaking to reporters on Monday at the end of a series of meetings with NATO leaders on the sidelines of the alliance summit, said that these conditions have to be met if it were to maintain troops in Afghanistan to protect and run Kabul’s international airport.

Turkey is reported to have offered to guard the Kabul airport, but questions remain on how security will be assured along major transport routes and at the airport, which is the main gateway to Kabul. “If they don’t want us to leave Afghanistan, if they want a (Turkish) support there, then the diplomatic, logistic and financial support that the United States will give us will of great importance,” Erdogan said.

Turkey, a majority Muslim nation which has close historic ties to Afghanistan, currently has some 500 soldiers in the war-torn country. “NATO leaders are yet to agree on who would run Kabul’s international airport following the troop withdrawal of the United States-led coalition from Afghanistan,” Secretary-General Jens Stoltenberg said, adding that Turkey would play a key role.

The leaders agreed to maintain funding for Kabul’s civilian airport after their military mission in the country ends later this year. “Recognizing its importance to an enduring diplomatic and international presence, as well as to Afghanistan’s connectivity with the world, NATO will provide transitional funding to ensure the continued functioning of Hamid Karzai International Airport,” a NATO summit statement said.

Erdogan also said he held a constructive meeting with US President Joe Biden and invited him to visit Turkey. On Afghanistan, Biden said, “There was a strong consensus in the room among the leaders on Afghanistan. Our troops are coming home, but we agreed that our diplomatic, economic, humanitarian commitment with the Afghan people will endure.” However, Czech President Milos Zeman, at the NATO summit, denounced the alliance’s troop withdrawal from Afghanistan, warning that it could turn the country into a new hotspot for terrorism, according to a spokesperson. “At the summit, President of the Republic Milos Zeman criticized the withdrawal of NATO troops from Afghanistan. He recalled that Czech soldiers had laid down their lives in the fight against terrorism in Afghanistan. He also warned that the Taliban, after taking over the entire country, could turn Afghanistan into a new center of terrorism,” Jiri Ovcacek tweeted. 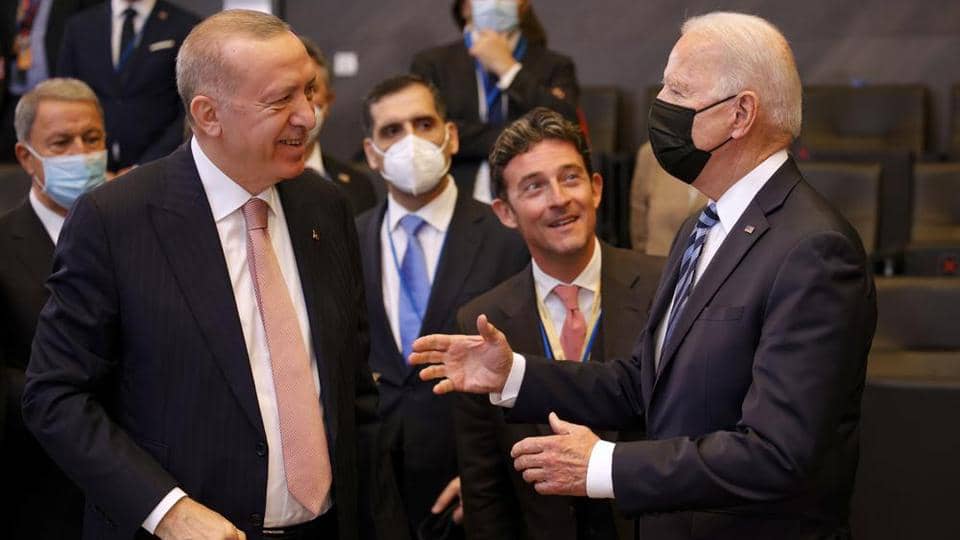 On the other hand, security officials under NATO command have approached Qatar to secure a base that can be used to train Afghan special forces as part of a strategic commitment after foreign forces withdraw from Afghanistan, three senior Western officials told Reuters. “We are holding talks to earmark a base in Qatar to create an exclusive training ground for senior members of the Afghan forces,” said a senior Western security official in Kabul.

The official, whose country is part of the US-led NATO alliance in Afghanistan, requested anonymity as he was not authorized to speak with journalists. An integral part of Resolute Support has been to train and equip Afghan security forces.

“We have made an offer but it is for the authorities in Qatar to decide if they are comfortable with NATO using their territory as a training ground,” said a second security source based in Washington DC. A third source, a diplomat based in Kabul, said bringing “Afghan special force members to Qatar for about four to six weeks of rigorous training” was under discussion. Qatar, an energy-rich Gulf state has been home to the Taliban’s political office since 2013. In recent years, this has been the only known venue where authorized representatives of the hardline insurgent group has held talks with US officials, representatives of NATO, international rights groups and Afghan government officials. Two sources said the US, Britain and Turkey were among the NATO countries ready to send a force to train Afghans in Qatar. Stoltenberg said the coalition’s leaders “reaffirmed their commitment to continue to stand with Afghanistan with training and financial support for Afghan forces and institutions.” They added that the alliance will “continue to provide training and financial support to the Afghan National Defense and Security Forces, including through the Afghan National Army Trust Fund.”

The alliance also said it will keep a senior civilian representative’s office in Kabul to “continue diplomatic engagement and enhance our partnership with Afghanistan.” The group reaffirmed its support for the “ongoing Afghan-owned and Afghan-led peace process” and called on all individuals involved to “help Afghanistan foster a last inclusive political settlement” that ends violence and protects the human rights of Afghans, especially women, children and minorities.

A Taliban spokesperson said the group was not aware of NATO’s plan to train Afghan forces in Qatar. “In case Afghan soldiers receive military training abroad, if peace is established then maybe the well-trained should be hired to serve Afghanistan but if they come and fight against us and their nation, then of course, they will not be trusted by us,” said Zabihullah Mujahid, a Taliban spokesperson.

Meanwhile, the United Nations is preparing for further displacement of civilians in Afghanistan after US and international troops leave the country in September, UN refugee chief Filippo Grandi told Reuters on Monday. Violence has been rising as foreign forces started their drawdown and efforts to broker a peace settlement between the Afghan government and Taliban have slowed.

Referring to last week’s attack on demining workers, Grandi said that the security situation is declining. “Therefore, we are doing contingency planning inside the country for further displacement, in the neighboring countries in case people might cross borders,” he said, without offering details of those plans.

There are currently some 2.5 million registered refugees from Afghanistan globally, while another 4.8 million have been displaced within the country, according to the UN refugee agency UNHCR, which Grandi heads.

“What’s needed is a high level of economic support for Afghanistan humanitarian assistance to maximize the chance the Afghan authorities have to stabilize the situation,” UN aid chief Mark Lowcock told Reuters on Monday. “There’s been very good and constructive outreach from the Biden administration, from the White House down, and we have actually had very productive discussions with them on that,” added Lowcock, who steps down from his role this month.

Earlier this month, the United States announced more than $266 million in new humanitarian aid for Afghanistan, bringing to nearly $3.9 billion the total amount of such aid it has provided since 2002. Some 18.4 million people, almost half the country’s population, need humanitarian help, according to the United, Nations, which has appealed for $1.3 billion in funding for 2021. So far it has only received about 23% of that.