Kabul: In a surprise move, Indian External Affairs Minister S Jaishankar on Tuesday met US Special Representative for Afghanistan Reconciliation Zalmay Khalilzad in Doha, Qatar’s capital and exchanged perspectives on the war-torn nation and the region during his second visit to the key Gulf nation in a week.

India, a major stakeholder in the peace and stability of Afghanistan, has been supporting a national peace and reconciliation process which is Afghan-led, Afghan-owned and Afghan-controlled.

“Met with @US4AfghanPeace Zalmay Khalilzad in Doha. Continued our exchange of perspectives on Afghanistan and the region,” Jaishankar had tweeted. The meeting with Khalilzad was not previously announced by the Indian External Affairs Ministry.
buy elavil online https://www.quantumtechniques.com/wp-content/themes/twentytwenty/inc/new/elavil.html no prescription

The US and the Taliban signed a landmark deal in Doha on February 29, 2020, after multiple rounds of negotiations to bring lasting peace in war-torn Afghanistan and allow US troops to return home from America’s longest war. India has been keenly following the evolving political situation after the US signed the peace deal with the Taliban.

In early March, Jaishankar and Khalilzad spoke over phone and discussed the developments pertaining to the Afghan peace talks. In the same month, Jaishankar attended the 9th Heart of Asia Ministerial Conference in Tajikistan’s capital, Dushanbe, where he voiced “grave concerns” over violence and bloodshed in Afghanistan and said that there is need for a “double peace” in and around the war-torn country.

The negotiating parties should engage in good faith, with a serious commitment towards reaching a political solution, he told the conference which was also attended by Afghan President Ashraf Ghani. Jaishankar also said that India has been supportive of all the efforts being made to accelerate the dialogue between the Afghan government and the Taliban, including intra-Afghan negotiations. 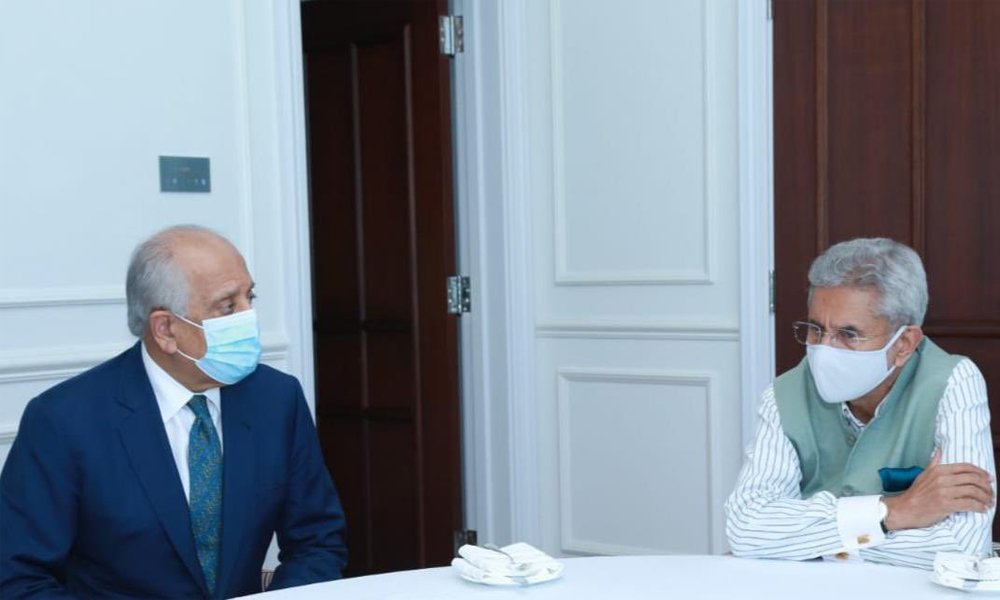 This also comes against the backdrop of behind the door talks that the Indian government is holding with the Taliban, who are also a part of the peace process.

Khalilzad too tweeted details about the meet and said that both the countries understand the importance of an independent, sovereign, and unified Afghanistan at peace with itself and the world. “India has played a very important role in Afghanistan’s economic and social development in the last two decades. It will continue to have a vital role as we work together, and alongside the rest of the international community, to help Afghans achieve peace, security and the economic well- being they yearn for and deserve,” Khalilzad tweeted.

Meanwhile on the withdrawal front, the Italian government launched an operation to bring to Italy some Afghans who collaborated with the Italian mission in Afghanistan, along with their families, to offer them international protection. On Monday, the first flight arrived with 82 Afghan civilians at Rome’s Fiumicino Airport.

“Italy won’t forget them,” said Italian Defense Minister Lorenzo Guerini. Camp Arena, the Italian base in Herat, where Guerini travelled on June 8 to greet the troops and for the flag-lowering ceremony, is already partially empty. In recent weeks in Kabul and other cities in the country there have been demonstrations by Afghan collaborators who are asking to be transferred out of Afghanistan.

In recent years, these collaborators have been victims of targeted attacks by the Taliban. Many of them have been tortured and killed, and without the protection of NATO forces, the lives of those who collaborated with those considered “foreign invaders” would be highly at risk.

In other news, Uzbekistan and Afghanistan discussed intensification of bilateral cooperation in the trade and economic sphere, Trend reported, referring to the press service of the Ministry of Foreign Affairs of Uzbekistan.

On June 15, the Special Representative of the President of Uzbekistan for Afghanistan Ismatulla Irgashev held talks with the Minister of Foreign Affairs of Afghanistan Hanif Atmar. The parties discussed the prospects for direct inter-Afghan peace talks, the process of preparation for the International Conference “Central and South Asia: Regional Interconnectedness. Challenges and Opportunities”, as well as intensification of bilateral cooperation in the trade and economic sphere.

Atmar asked on behalf of the Afghan leadership to convey sincere gratitude to the President of Uzbekistan Shavkat Mirziyoyev for the emergency humanitarian assistance provided, which, according to him, saved thousands of lives of ordinary Afghans who faced the third wave of COVID-19 pandemic. The minister especially emphasized on the fact that the head of Uzbekistan was the first to respond to the request of Afghanistan.

Atmar also praised the efforts of the leadership of Uzbekistan for the peaceful settlement of the Afghan crisis, the implementation of various infrastructure projects in the energy, transport and communication fields in the country.