Kabul: The first trilateral meeting of the Foreign Ministers of the Islamic Republic of Iran, Turkey, and Afghanistan – Mohammad Javad Zarif, Mevlut Cavusoglu, and Mohammad Hanif Atmar- began in Antalya on Sunday.

The Antalya Diplomacy Forum is an appropriate opportunity for high-ranking officials from around the world to hold discussions.

The three Foreign Ministers reaffirmed their commitment to further enhance solidarity and cooperation among the peoples of the three countries based on deep-rooted historical, religious and cultural commonalities and shared values that will serve to strengthen peace, stability, prosperity and cooperation in the region,

They also underlined their commitment to further expand cooperation particularly in the areas that would contribute to economic progress and sustainable development. They expressed their willingness to enhance their cooperation on regional connectivity in the fields of transport, trade, energy and infrastructure, in this regard agreed to conclude a Memorandum of Understanding,

The three ministers also underlined the importance of further strengthening cooperation in the fight against terrorism and violent extremism in all their forms and manifestations, transnational organized crime and illicit trafficking in narcotic drugs and their precursors, and arms, human trafficking, crimes against cultural and historical heritage, cybercrimes and illegal migration. They further expressed their determination to increase cooperation in people-to-people contacts, education, social and cultural exchange and tourism.

The ministers also recognized the importance of the Heart of Asia-Istanbul Process (HoA-IP) as a substantial platform that contributes to regional stability in fields ranging from political and security cooperation to economic integration and acknowledged the role of the regional and neighboring countries, in particular the Islamic Republic of Iran and Pakistan, in hosting Afghan refugees and called for creating conducive conditions in Afghanistan for their voluntary, safe, dignified and sustainable repatriation,

Apart from this, they also agreed to enhance cooperation in the field of migration and urged international community to increase technical and financial assistance to host countries in taking care of the essential needs of Afghan refugees and to provide support to the repatriation and reintegration efforts of the Government of Afghanistan and emphasized on their commitment to support a sovereign, independent, democratic and unified Afghanistan.

The ministers deplored the continuing high level of violence in Afghanistan and particularly condemned attacks targeting civilians and reiterated that sustainable peace can be achieved only through an inclusive Afghan-led and Afghan-owned political process that aims a permanent and nationwide ceasefire as well as an inclusive political settlement. 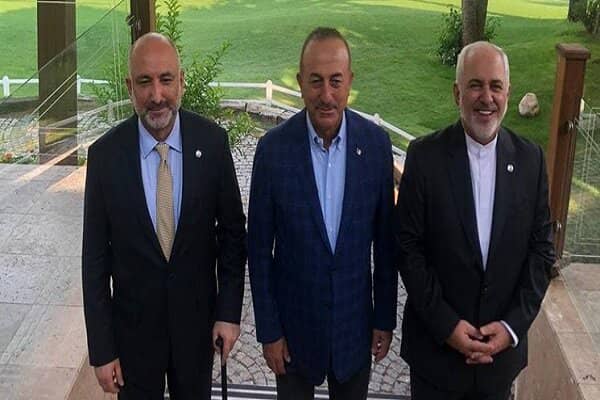 The countries also declared their ongoing support to the Afghan Peace Negotiations for the achievement of a just and durable political settlement. They recognized the efforts of Turkey together with Qatar and the UN to hold a high-level meeting in Istanbul aimed at giving momentum to the ongoing Afghan Peace Negotiations and called on the Taliban to fulfill their commitment for ending violence, establishing immediate and permanent ceasefire and achieving an inclusive negotiated settlement leading to lasting peace in Afghanistan desired by the Afghan people, the region and the international community.

They also called upon countries to refrain from applying unilateral economic sanctions as tools of political or economic pressure and reiterated the importance of the Joint Comprehensive Plan of Action and its full implementation by all sides for the security and economic welfare of the region and beyond.

The ministers reiterated their commitment to cooperation and solidarity during the COVID-19 pandemic, and working with the spirit of cooperation, unity and solidarity to protect the health of all our citizens, and make efforts to ensure equitable access to the vaccine.

It was agreed that the next meeting will be held in Tehran on a date to be determined in due course.

Meanwhile, Iranian minister Zarif had arrived in Antalya on Thursday, June 17, to attend the Antalya Diplomatic Forum. He met with some officials present, including the foreign ministers of Iraq, Venezuela, Afghanistan, Croatia, Pakistan, Tajikistan, Poland as well as EU Foreign Policy Chief Josep Borrell and the Head of Afghanistan’s High Council for National Reconciliation Abdullah Abdullah. Zarif and Turkish Foreign Minister Mevlüt Çavuşoğlu discussed ways to expand economic cooperation and they reached an agreement to hold tripartite sessions among Ankara, Baku and Tehran to discuss railroad and waterway projects. Zarif also met his Pakistani counterpart Shah Mahmood Qureshi and touched upon the results of the Iranian presidential election, expressing hope that the trend of Tehran-Islamabad cooperation in bilateral and regional domains will keep growing in the new Iranian administration.

Qureshi, in turn, referred to the fragile situation in Afghanistan, and emphasized on the need to further cement Iran-Pakistan cooperation in establishing stability and fighting chaos in Afghanistan.