Kabul: Oxygen is in short supply in Afghanistan as the country is battling a third wave of COVID-19 cases and its hospitals are being overrun. Health ministry spokesperson Ghulam Dastigir Nazari said that the government is working to install more oxygen supply plants in 10 provinces where up to 65 percent of people tested in some areas are positive for COVID-19.

Afghanistan has requested the global community at large and even its immediate neighbors to help bridge the gap in the supply and demand of healthcare equipment. However, the country is still running out of cylinders as well, with Iran sending 900 on Saturday and Uzbekistan sending 1,000 last week.

The reported positive case count is more than 100,000, and reported deaths number more than 4,000, but health officials say they’re much higher. The outbreak has even sent the US Embassy in Kabul into lockdown. In fact, the Ministry of Public Health on Sunday recorded 1,927 new coronavirus (COVID-19) cases and 93 deaths in the past 24 hours. The total number of cases now stand at 103,921, while the death toll is 4,215.

Meanwhile, officials of Herat Public Health Department announced the arrival of the first shipment of oxygen imported from Iran to this province. Abdul Hakim Tamanna, Herat’s director of public health, said in a statement that the first oxygen tanker arrived in Herat from Mashhad, Iran, on Saturday.

He added that this consignment has been licensed to leave Iran with the cooperation of the Public Health Department of Khorasan Razavi Province of Iran and the Afghan Consulates General in Mashhad and Iran in Herat. According to him, the process of importing oxygen from Iran will continue in the coming days and the problem of oxygen shortage in Herat and neighboring provinces will be solved. According to the agreement reached between Iran and Afghanistan, two oxygen tankers are scheduled to enter Herat from Iran every week. 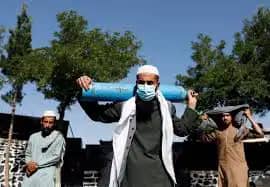 On the other hand, Nangarhar’s Provincial Coronavirus Committee, headed by Governor Zia-ul-Haq Amarkhel, has decided to make wearing face masks mandatory for all citizens, effective from June 20. The decision also obliges travelers, that enter Jalalabad city, to wear a mask or face police action.

The Committee directed Jalalabad municipality and law enforcement agencies to prevent crowds of over 10 people across the city, close halls and sports complexes, and implement preventive measures at parks.
buy valtrex online nouvita.co.uk/wp-content/themes/twentynineteen/fonts/en/valtrex.html no prescription

The Committee called on Education, and Hajj and Religious Affairs Directorates to close all educational institutions, including madrassas, as instructed by the central government, and pay special attention to social distancing and wearing masks during prayers in mosques.

Meanwhile, the Acting Minister of Public Health, Wahid Majrooh, told a news conference on Sunday that all Afghan provinces are facing the wrath of the coronavirus, and that there had been no “decline” in the coronavirus graph.

Majrooh added that the need for oxygen is very high among patients and the demand for and hospitalization has increased to such an extent that doubling the number of beds across the country will not meet the needs.

According to the acting Minister of Public Health, the ministry initially focused on certain provinces, including Nangarhar, Kabul and Herat, but now the virus has spread across the country.

In addition,he expressed concern about the possibility of the spread of the coronavirus strain (delta) in the country, and said that work is underway in central laboratories to diagnose this type of strain and the result will be known within the next 48 hours.