Kabul: As the international community observed World Refugee Day on Sunday, Pakistan reiterated its call for greater global responsibility-sharing, redoubling of efforts for durable solutions, and an early peaceful political settlement in Afghanistan.

Pakistan Foreign Minister Shah Mahmood Qureshi said that the peaceful political settlement in Afghanistan could pave the way for dignified, time-bound and well-resourced repatriation of Afghan refugees supported by the international community. He said for over four decades, Pakistan has led by example in refugee protection and had been one of the world’s largest refugee hosting countries. Pakistan still hosts around three million Afghans providing them necessary protection, he added.

“The people of Pakistan have contributed more than their fair share of shouldering an international responsibility by hosting millions of refugees. Pakistan has also been playing a key role in facilitating sustainable peace in Afghanistan,” the Pakistan foreign minister remarked.

Meanwhile, Qureshi on Sunday also met with his Turkish counterpart Mevlüt Çavusoglu in Antalya and discussed matters of mutual interest, latest developments in the Afghan peace process and the withdrawal of international troops from Afghanistan. 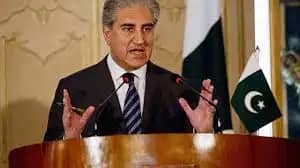 Meanwhile, the spokesperson of the Pakistan embassy in the United States said on Sunday that Islamabad will extend its help in the ongoing efforts to recover US national Mark Frerichs, who is reportedly in the captivity of the Taliban in Afghanistan.

Spokesperson Maliha Shahid, who is a press attache at the Pakistan Embassy in Washington, told ABC News that Islamabad had “no evidence to suggest that Mark Frerichs is being held in Pakistan” and that Pakistan “remains committed to play any role it can” to reunite Frerichs with his family. She added that, “Pakistan has always regarded any assistance it can provide in helping the United States and other foreign countries with the recovery of their hostages from Afghanistan as a moral and humanitarian responsibility”.

Samim urged the Pakistani government to respect Afghanistan as a neighbor and avoid hostile statements about the country. Samim also rejected Qureshi’s claim that Taliban leaders were present in Afghanistan, and added that the Quetta Shura, which is run by Taliban leaders, is located in Pakistan, and the Afghan people and the world know about it. Samim claimed that Pakistan is afraid of a strong Afghanistan.