Kabul: The Ministry of Defense (MoD) on Monday announced that security and defense forces along with the popular uprising forces recaptured Bangi and Khwaja Ghar districts of Takhar province from the Taliban.

Fawad Aman, deputy spokesperson for the Ministry of Defense, tweeted that Taliban fighters had fled the two districts as a result of attacks by defense and security forces and popular uprising forces. Aman also added that government forces had also launched attacks in the villages of Abdal and Qarah Percho in Taloqan, the capital of Takhar. He said the Taliban had suffered heavy casualties as a result of the attack.

At the same time, Abdul Hadi Nazari, a spokesperson for the 217th Pamir Corps, said that the people’s uprising forces had played an effective role in the operation. He stressed that the popular forces in Takhar are currently fighting the Taliban alongside government troops.

Nazari added that these forces are currently facing a shortage of ammunition and will soon be equipped by the Ministry of Interior and the National Directorate of Security. The Taliban have not yet commented on the recapture of districts by government forces.

Meanwhile, with the centers of many districts in Faryab now under Taliban control, clashes have begun in the city of Maimana in the northern province, increasing the alarm for Faryab residents and lawmakers from the province in Kabul, who say that urgent action by the security forces is needed.

However, good news is that reinforcements arrived in the northern province of Faryab during the early hours of Monday morning to launch operations in areas that have fallen the Taliban, the provincial police said. The security forces have mobilized and will launch the operation soon, Faryab police spokesperson Abdul Hakim Yurish said.

The police spokesperson said that “four Taliban insurgents were killed and 11 more were wounded in a clash in Pashtun Kot district in Faryab”. He added that seven Taliban insurgents were killed in operations by security forces in Sabz village in Pashtun Kot district. The Dahan Dara village in the district was also cleared of Taliban, he said. Taliban has not yet commented on the operations.

A statement by Afghan Army’s 209 Shaheen Corps read that the Taliban’s gatherings were targeted by airstrikes in Dawlat Abad and Chahar Bolak districts in Balkh on Sunday in which 31 members of the group were killed and seven more were wounded. The officials said that 11 vehicles owned by the Taliban were damaged in the airstrikes, the statement said.

Taliban has issued a statement and claimed that they have captured the center of Dawlat Abad and Shulgara district in Balkh province, but local officials have not commented on the fall of the areas to the group.

However, Doshi, a key district in Baghlan province which connects the capital and central parts of Afghanistan with the northern provinces, has been fallen to the Taliban on Sunday night, an official confirmed to Khama Press. Sahib Dad Ghafori, the district governor for Doshi said that as a result of Taliban’s attack on Doshi district on Sunday afternoon and the lack of enough supporting forces and facilities, the local government forces have set back to Kayan valley. According to separate reports, Jilga, another district in Baghlan has also fallen in the hands of the Taliban fighters.

Local sources in Baghlan province told Hashte Subh daily that a large-scale Taliban offensive in the Tala Wa Barfak district of Baghlan province has repulsed. Reports said on Monday that the Taliban had attacked the district overnight from four fronts and met with heavy resistance from security forces. Taliban’s attack to seize the district was defeated in a fierce clash that lasted until Monday morning.

Zabihullah Mujahid, Taliban spokesperson, wrote on Twitter that the group had taken full control of the district. The Afghan Ministry of Defense (MoD) has said that the defense forces are temporarily withdrawing tactically from some districts so as not to harm civilians. 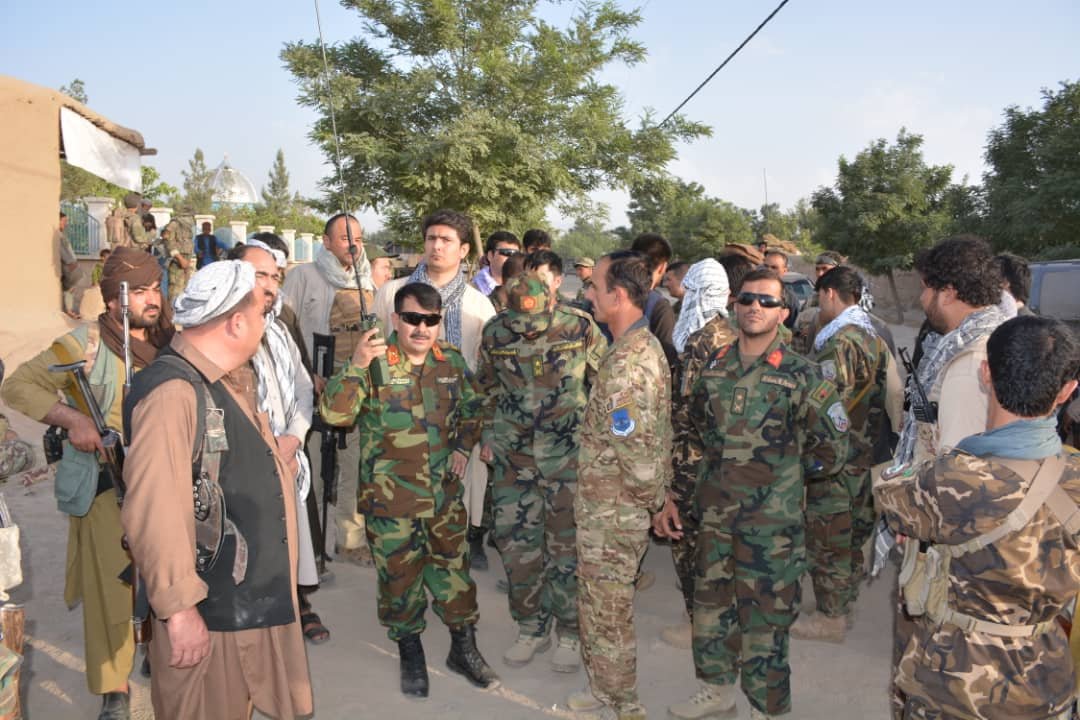 In fact, security officials in Baghlan province said that the popular uprising forces have too been mobilized in the Khenjan district of the province to support security forces against the Taliban. Baghlan police spokesperson Ahmad Javed Besharat said on Monday that uprising forces in the Khenjan district of Baghlan province, led by a jihadi commander named Jalaluddin Bajgahi, had announced their readiness to support security forces in the district.

The forces came to the battlefield in the district with light and heavy weapons with the help of security forces. Popular uprising forces said that they will not allow the Taliban to destabilize the district. Khenjan is one of the key districts in Baghlan province, located on the northern Salang route and connecting the northern provinces to the center.

This move has highlighted how hundreds of residents of Parwan, Badghis, Faryab, Jawzjan, Takhar and some other provinces have been mobilized against Taliban following the fall of the districts. In addition to mobilizing civilian forces, commandos have moved to some of Afghanistan’s northern provinces and are set to launch military operations to clear lost districts.

Popular mobilization against the Taliban has taken place in the last few days, with seven districts in Takhar, one in Balkh, two in Samangan, four in Jawzjan, two in Faryab, one in Kunduz and several northern provinces of Afghanistan, have fallen to Taliban fighters.

Meanwhile, it has been about 12 days since the Taliban attacked the Patu district of Daikundi province and residents have been displaced and fear more violence. In the first days of the attack on the district, the Taliban captured the predominantly Pashtun area of Tamzan. After several days of fighting, last Thursday, Sar Tagab and Bari areas of the district were also captured by the Taliban, as per reports of Hashte Subh daily. Many families have been displaced by the clashes and have sought refuge in parts of Kati, Kajran, Qakhoor, center of Patu, as well as Nili, the capital of Daikundi province.

IDPs from the Patu war now say the government has not paid any attention to their situation and that the displaced, including women and children, are in dire straits. Daikundi Provincial Council also criticized the local government and said that it has not taken any action to reach the displaced people of Patu war. The governor of Daikundi cited the lack of drinking water in the city of Nili due to the drought as one of the problems for the local administration.

In fact, in a virtual meeting with Provincial Information and Culture Directors, Acting Minister of Information and Culture Mohammad Tahir Zuhair called for the launch of a national mobilization against Taliban propaganda. The call comes at a time when a number of media outlets have reported that several districts have fallen to the Taliban and circles in favor of the Taliban have waged a psychological war against the Afghan people.

Zuhair said, “Taliban actions are false and they are not able to stand against the people and our defense and security forces, and this group has turned to a propaganda war against the people.” Zuhair urged provincial directors to pay serious attention to the preservation of cultural heritage and historical monuments so that these assets will not be damaged during fighting and violence.

Zuhair added that the Taliban blow up buildings, target the people, and conduct other catastrophes, which are all signs of weakness, because the group knows that its dominance is short-lived. Zuhair gave assurances that the ANSDF will soon recapture the lost districts, and the people will hear good news in the next three or four days.