Kabul: In a telephone conversation with Afghan President, Iran’s President-elect Ebrahim Raisi stressed on the need to deepen relations and expanding cooperation between Tehran and Kabul.

Afghan President Mohammad Ashraf Ghani felicitated Raisi on his victory in Iran’s presidential election, wishing him success and prosperity. “Afghanistan and Iran are two neighboring and brotherly countries, and I hope that your election as President-elect of the Islamic Republic of Iran will further expand relations and cooperation in various fields between the two countries”, said Ghani in this telephone conversation, according to official press service of the Afghan President.

Raisi expressed his gratitude for President Ghani’s telephone call and stressed the need to deepen relations and expanding cooperation between the two countries.” In fact, local officials in Herat said on Tuesday that Iran’s land border has been opened for the entry of travelers with business, medical, student and resident visas.

Foreign Ministry officials in Herat said that people with tourist and pilgrimage visas cannot enter Iran through the land border at the discretion of Iranian officials. Iran’s land border with Afghanistan was closed unilaterally about two months ago, after which the price of a Herat-Mashhad ticket increased. The closure of the land border created many problems for travelers and provoked protests from residents of the western provinces of the country and the province bordering Iran. 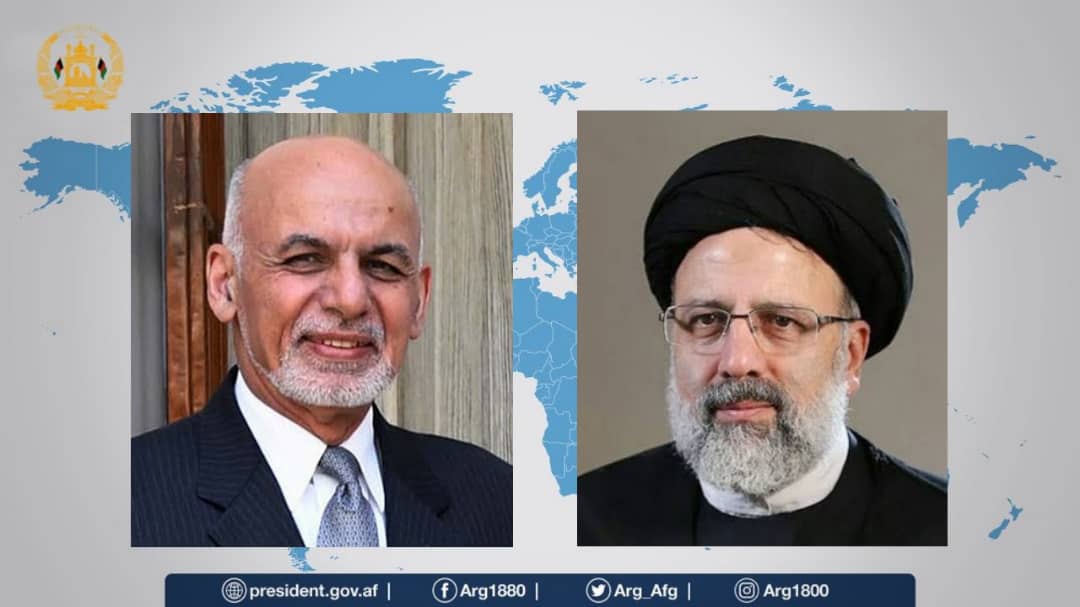 “External Affairs Minister S Jaishankar will address the UNSC debate on Afghanistan tomorrow,” said the official Twitter handle of Permanent Mission of India to the United Nations, New York. Earlier, India has noted the United States’ decision to withdraw its troops from Afghanistan and has expressed concerns over the probable increase in the violence and targeted killings in the war-torn country.

In a statement in April, the Indian Ministry of External Affairs said New Delhi is of the view that an Afghan peace process should be Afghan-led, Afghan-owned and Afghan-controlled and any political settlement must be inclusive and should preserve the socio-economic and political gains of the past 19 years. India has also called for an immediate and comprehensive ceasefire.

Also, before the UNSC debate, the Human Rights Watch has prepared a report which found that children are often held in military facilities in violation of Afghan law, and often sign documents involuntarily, including confessions, that they do not understand. “They are charged with vaguely worded “terrorism offenses” and may be sentenced to up to 15 years in prison. Many children in custody are detained solely because of their parents’ alleged involvement with insurgent groups,” said the Human Rights Watch.
buy fluoxetine online https://www.icriindia.com/uploads/colleges/new/fluoxetine.html no prescription

In fact, it has asked the Afghan government to release children detained for alleged association with armed insurgent groups and work with the United Nations and donors to establish programs for their reintegration into society.

Hundreds of children are currently detained for alleged involvement with the Taliban, the extremist armed group Islamic State-Khorasan Province (also known as IS-KP), or other armed groups, and are often tortured in facilities run by government security forces, as per the group. “Detaining and torturing children who have already been victimized by armed insurgent groups is inhumane and counterproductive,” said Jo Becker, children’s rights advocacy director for Human Rights Watch. “Instead of letting these forgotten children languish in prison, the Afghan government, the UN, and donors should immediately establish programs to reintegrate these children into society.”

The United Nations Assistance Mission in Afghanistan (UNAMA) has found that children detained in Afghanistan for conflict-related charges were more likely than adults to report torture. Nearly 44 percent of children interviewed in 2019-2020 provided credible accounts of torture or ill-treatment, compared with roughly 32 percent for all detainees. Random interviews by UNAMA during that period found children as young as 10 detained in military or security facilities.

“These children are being forgotten, and their continued detention and abuse will not deter future violence,” Becker said. “Parties concerned about Afghanistan’s future should prioritize the release and reintegration of children detained for alleged association with armed groups and ensure that protecting children is high on the agenda of the peace talks.”