Kabul: Following the fall of a number of districts to the Taliban, Wahid Omar, an adviser to the president and head of the president’s public relations and strategic affairs authority, said that the situation would change soon and the Taliban wave of attacks on district centers is not permanent.

Speaking at the introduction of Ajmal Shinwari, as public spokesman for the security and defense agencies at the government’s information and media center, Omar said on Tuesday that the wave of Taliban attacks had been launched amid the withdrawal of foreign troops from Afghanistan.

Omar said the Taliban’s goal in launching this wave of attacks is to demoralize the people, and the group wants the people to conclude that the Taliban are ruling Afghanistan. He added that the wave of Taliban attacks is not continuous and that the group could not have a permanent presence in any district. “We are taking back the districts,” he stressed.

According to Omar, the Taliban closed schools, set fire to health buildings and clinics, and barred children from attending school. “There is no such thing as service, governance and systematization in the Taliban,” he said. According to him, the people of Afghanistan have seen the main face of the Taliban over the past month, who have become “more savage, more cruel and more brutal” than in previous years.

Wahid Omar further referred to the Taliban’s psychological warfare against the Afghan people. He said civil society activists, the media, members of the provincial council and social media users should not inadvertently become a platform for the Taliban to speak out because of differences of opinion with the government.

“We should not weaken the morale of the security forces and cause the collapse of the umbrella of the regime because of the difference of opinion with the government,” Omar added. “As people stand up against the Taliban in the area and in the village, our wish is that we support the same people in cyberspace.” 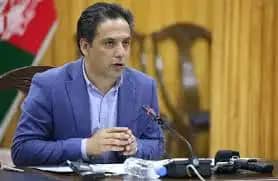 He also said that yesterday they sent a letter to the provincial councils asking them not to act as spokespersons for the security and intelligence agencies and to fulfill their main duties. According to him, members of the provincial council should not ruin the morale of the people. In recent days, people have mobilized to support the security forces and stand by them, the presidential adviser said. He said the government leadership supports the people’s resistance.

On the other hand, President Ghani has approved National Security Council’s proposal to appoint Shinwari as general spokesman for security agencies. Omar said that a single spokesman was appointed for the ANSDF to provide information from a unified source.

Omar added that the MoD, MoI, and NDS spokesmen are working together to foil enemy conspiracy both on the battlefield and virtual space. Shinwari vowed to work properly and share the realities on the ground with the people and media.

He described the current conditions as sensitive and gave assurances that the new MoD and MoI leadership will achieve remarkable successes and change the current security situation. Shinwari added that executing plans for special and clearance operations will be developed to recapture the lost areas.

Meanwhile, security sources in Faryab province said that Taliban fighters set fire to a school in Maimana, the provincial capital. Karim Yurish, spokesperson for the Faryab Police told Hashte Subh daily on Tuesday that the incident took place in the village of Qutur in Faryab. Yurish added that it was a high school. The Taliban have not yet commented on the matter.

Also, as two districts and the commercial port of ShirKhan in Kunduz province collapsed to the Taliban, the Ministry of Defense announced the arrest of six people who had encouraged security and defense forces in the province to hand over their checkpoints to the Taliban.

The Ministry of Defense (MoD) said in a statement on Tuesday that the men were trying to hand over a checkpoint to the Taliban in the “Kala Gaw” area of Kunduz city without any clashes. The statement refers to the Taliban as “infiltrators.”

The Ministry of Defense announced the arrests of these individuals. Since Monday night, the districts of Char Dara and Goltapa in Kunduz and the commercial port of ShirKhan in the province have fallen to the Taliban. The Dasht-e-Archi, Qala-e-Zal and Imam-e-Sahib districts of Kunduz are also under Taliban control.

Even AIHRC said that an escalation in fighting and expansion of violence has led to an increase in civilian casualties and destruction of infrastructure. The AIHRC has emphasized on negotiations as the most constructive, ethical, and best mechanism to resolve issues and now also emphasizes on its position. It called on the UN, influential domestic and international organizations, and international community to use their facilities, opportunities, and capacities, to end violence and war, before the crisis deepens.

The AIHRC urged the warring parties to understand the suffering of the Afghan people, obey collective interests, and honor public rights and demands, to end violence and agree to a permanent ceasefire and return to the negotiating table to resolve conflicting issues and achieve a just and enduring peace.

Following the recent collapse of districts in the north of the country, former Vice-President Ahmad Zia Massoud called on political leaders to set up a joint military and political committee as soon as possible to mobilize and coordinate the people’s forces.

In a Facebook post on Tuesday, Massoud stressed that the joint military-political committee must be fully prepared to prevent any unforeseen events. Ahmad Zia Massoud, the deputy leader of the Jamiat Party led by Salahuddin Rabbani, has called on political leaders to stand with the people and popular uprisings on the fronts of the war on terror as soon as possible.

Massoud said Afghanistan has been attacked by international terrorism and that “the Taliban, al-Qaeda, ISIS and dozens of other terrorist groups, in collusion with pro-Taliban elements in the current government, are trying to overthrow the political system in favor of the Taliban and the Islamic Emirate.”

Massoud called the Taliban a “mercenary, terrorist and foreign-affiliated” group. The deputy leader of the Jamiat party stressed that the peace talks were an “occupying and deceptive” move and is not in the interests of the people. According to him, the Taliban have no desire for peace, but their supporters want to legitimize the Taliban through these fruitless talks.

Popular mobilization groups have been formed to fight the Taliban in many northern provinces. The Ministry of National Defense has announced its readiness to support and equip the people’s forces.