The deputy spokesperson for the Ministry of Defense said that heavy and aggressive Taliban attacks in the northern provinces had been repulsed. In the past 24 hours alone, more than 200 Taliban members have been killed and more than 100 others wounded in operations by security forces and popular mobilizations, Fawad Aman said.

Ghazni’s deputy provincial council head Amanullah Kamran stated that the ANDSF retreated from Ab Band district to Qarrabagh district, after several days of being surrounded. Kamran warned that Qarabagh, Muqur, and Gelan districts were also on the verge of collapse.

Meanwhile, the Ministry of Interior said that people have stood up against the Taliban in different parts of the country to support their security forces, and have taken an active part in suppressing the group.

Local officials in Jawzjan province also confirmed that dozens of women in the province have taken up arms against the Taliban. Abdul Marouf Azar, spokesman for the governor of Jawzjan, said that the number of women reached dozens. Moslema Atai, the head of women’s affairs department in Jawzjan, is one of them. Azar added that these women rejected the Taliban war and stressed that they stood by the security and defense forces against the Taliban. 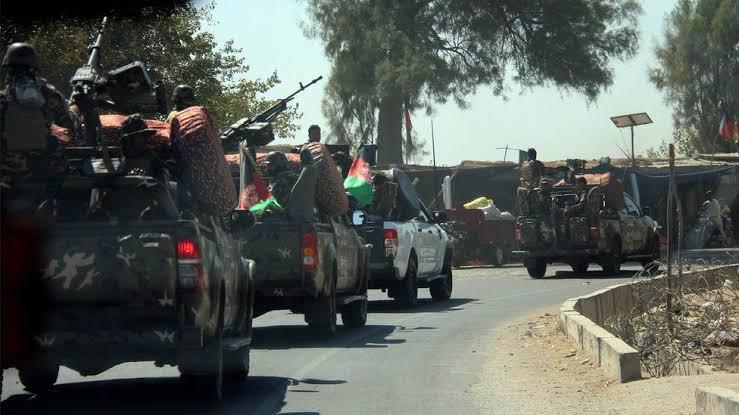 Hundreds of residents of Kabul’s Kohdaman district and supporters of Mir Amanullah Gozar, Kabul’s representative at the Lower House of Parliament, also took up arms against the Taliban and expressed support for the security forces.

Meanwhile, the Office of Prisons Administration has released a statement in response to a report published by International Human Rights Watch regarding torture of children in prisons of Afghanistan.

They rejected the claim of the Human Rights Organization that the arrested children are being tortured or abuse. “The allegations of child abuse mentioned in the report were completely baseless and no child in Afghan prisons has been convicted of any crime related to insurgents or opponents. There are children in women’s prisons because their mothers have been imprisoned for various crimes and these children are being cared by their mothers so that, school, educational and training facilities have been set up inside the prisons for them,” the statement added.