Kabul: The Afghan foreign minister at an online meeting of members of the UN Security Council said that the Taliban has not fulfilled its obligations to the United States. “They have not cut ties with international terrorism,” Mohammad Hanif Atmar said.

The Afghan foreign minister also said in a speech on Wednesday that the Taliban had pledged to reduce violence in an agreement they signed with the United States on February last year. But not only has the violence not diminished, he said, but the Taliban have intensified the war to a level not seen in the past 20 years.

Meanwhile, President Ashraf Ghani, referring to the recent increase in Taliban attacks, said that the continuation of the current situation cannot give the group political legitimacy. Hundreds of thousands of people have been displaced as a result of Taliban attacks and violence, according to President Ghani. However, President Ghani has called on the Taliban to stop the violence and destruction of the country’s economy and work together with the government. The Taliban have taken control of more than 60 districts in the past two months. Thousands of families have been displaced by Taliban attacks. Security and defense forces have recaptured a number of these districts from the Taliban. In a number of provinces, popular mobilizations against this group have been formed in some other parts of the country.

Sarwar Danesh said during the meeting that the security situation would soon improve and that the level of threats against human rights defenders would decrease. Ministry of Defense has also repeatedly said that the defense and security forces have taken a tactical retreat to prevent the spread of casualties.

Deputy Interior Minister for Policy and Strategy Naqibullah Fayeq also traveled to Mazar-e Sharif city, to assess the security situation. During the visit, Fayeq stated that the central government supports people’s uprisings against the Taliban across the country. Fayeq added that the government will distribute adequate weapons, ammunition and vehicles to those, who are ready and volunteer to defend their homes and territory. Fayeq gave assurances that the Taliban will never be able to capture cities and the lost areas will soon be recaptured. Fayeq said that Taliban’s recent advancements were mostly based on propaganda. 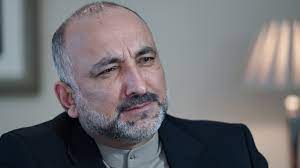 Senior Presidential Advisor on Security and Political Affairs, Mohammad Mohaqqeq, also travelled to Mazar-e Sharif, Balkh province on Wednesday, to mobilize the people against the Taliban. Mohaqqeq said that Mazar-e Sharif city is the threshold for the government, public, and political factions. Mohaqqeq added that the city had previously witnessed Taliban’s violence and urged the public to stand firmly and foil Taliban’s tricks used to capture other areas.

Mohaqqeq said that he had previously called on the Taliban to gain power through peace, elections, and logic, as the ANDSF were the sole legitimate force to carry guns, however; the group forced the people to pick up arms, and fight alongside the security forces. Mohaqqeq highlighted that his visit is aimed to collaborate with other factions. Recently, Head of Jamiat-e Islami Party’s splinter group Atta Mohammad Noor, and Member of Parliament (MP) for Balkh province Abbas Ibrahimzada travelled to Mazar-e Sharif city, to mobilize the people against the Taliban.

Meanwhile, five civilians were killed and 20 more, including women and children, were wounded in a roadside bomb blast in the southern province of Kandahar on Tuesday night, the provincial police said on Wednesday.

The incident happened on Kabul-Kandahar Highway in Maiwand district in Kandahar on Tuesday night after a passenger vehicle was hit by a roadside mine, police said. Health officials confirmed the casualties and said “the wounded include women and children.” No group, including the Taliban, has claimed responsibility for the blast. This comes as Maiwand district fell to Taliban following clashes on Monday.