Kabul: The US retrograde mission is now over 50 percent completed, said US Central Command on Wednesday, while also announcing that they will not be providing the specific percentage of the exit process going forward for operational security and to preserve force protection.

Since the Biden’s decision, the US Department of Defense has retrograded the equivalent of approximately 763 C-17 loads of material out of Afghanistan and have turned nearly 14,790 pieces of equipment to the Defense Logistics Agency for disposition. The 14,790 pieces of equipment comprise almost entirely federal excess personal property. Most of this equipment is not defensive articles or considered to be major equipment.

Also, the US has officially handed over six facilities to the Afghan Ministry of Defense. “We anticipate additional transfers of bases and military assets in the future which will support the ANDSF/GIRoA as they work to stabilize and defend their nation,” said Centcom.

Meanwhile, the first group of former Afghan interpreters whose lives are in danger because they worked for the British military are due to arrive in the UK under a new government scheme, as per Sky news reports. An aircraft reportedly carrying more than a dozen Afghans who were employed by UK forces, as well as family members, landed in Midlands on Tuesday.

The Ministry of Defense declined to comment on the flight because of security concerns for the men, women and children who have asked to flee Afghanistan after threats from the Taliban. The Taliban considers those associated with the US and NATO-led mission in Afghanistan to be traitors. 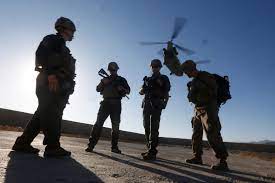 Concerns over the safety of former staff, most of them interpreters, prompted the UK ministry and the UK Home Office in May to expand the eligibility criteria of a relocation scheme for Afghans seeking to flee. Earlier, the government resisted pressure to allow large numbers of men and women to relocate, saying such a move would deprive Afghanistan of a talented pool of young people who would be crucial for the country’s future prosperity.

More than 3,000 Afghans are expected to accept the offer, along with about 1,300 who have already made the journey under a previous, more restrictive policy. They are expected to be flown to the UK in groups.

Meanwhile, during a joint meeting with participation of members of territorial defense zone No 1 that took place on June 20, Yodgor Fayzov, the Governor of the Gorno Badakhshan Autonomous Region (GBAO) also discussed the latest developments in Afghanistan.

“At this meeting, we discussed how the instable situation in Afghanistan can affect can affect the lives of our people and what to do in case of a potential threat,” said Fayzov. “Therefore, we must always be on high alert. Although the situation on our stretch of the Tajik-Afghan border is stable and so far, there is no threat.”

“The tense situation in border areas of Afghanistan obliges us to ensure internal stability, and in the event of the possible violation of state border, to take to take appropriate reciprocal measures and defend our country,” he noted. GBAO has a long border with the Islamic Republic of Afghanistan, and therefore, it is necessary to regularly strengthen activities of the territorial defense zones. The border security has been strengthened and border guards are on high alert.

“In case of aggravation of the situation of residents living on the other side of the border, we are ready to accept refugees.
buy furosemide online https://ukmssb.org/wp-content/themes/twentyfifteen/inc/php/furosemide.html no prescription

Of course, if they need it. That is, in any case, in difficult times you need to support your neighbor. During the civil war in Tajikistan, these people accepted our refugees, and today we will help them.”

“Taking into account our economic and political opportunities, we are ready to accept more than 10,000 refugees our Afghan brothers and take care of them in a safe place,” GBAO governor noted.