Kabul: US Secretary of State Antony Blinken said on Friday that Washington was assessing whether the Taliban was serious about ending the conflict in Afghanistan, and that trying to take back the country by force was not consistent with peace efforts, foreign media reported.

“We are looking very carefully at the security on the ground in Afghanistan and we’re also looking very hard at whether the Taliban is, at all, serious about a peaceful resolution of the conflict,” Blinken told a joint news conference with France’s foreign minister.

“But actions that would try take the country by force are, of course, totally inconsistent with finding a peaceful resolution.” The Pentagon estimates the Taliban now control 81 of Afghanistan’s 419 district centers. The US military has completed more than half its withdrawal from Afghanistan and is set to finish within weeks. Officials say between 600 and 700 US troops are likely to remain to help provide security for diplomats. It is unclear how Afghan security forces will perform after US troops depart.

Meanwhile, according to a new AP report, the United States plans to leave hundreds of troops in Afghanistan even after the promised withdrawal from the war-torn country. The Associated Press reported on Friday that about 650 American troops will stay in Afghanistan to provide security at the US Embassy after troops leave the country later this summer. Hundreds of more troops will also stay at the Kabul airport. 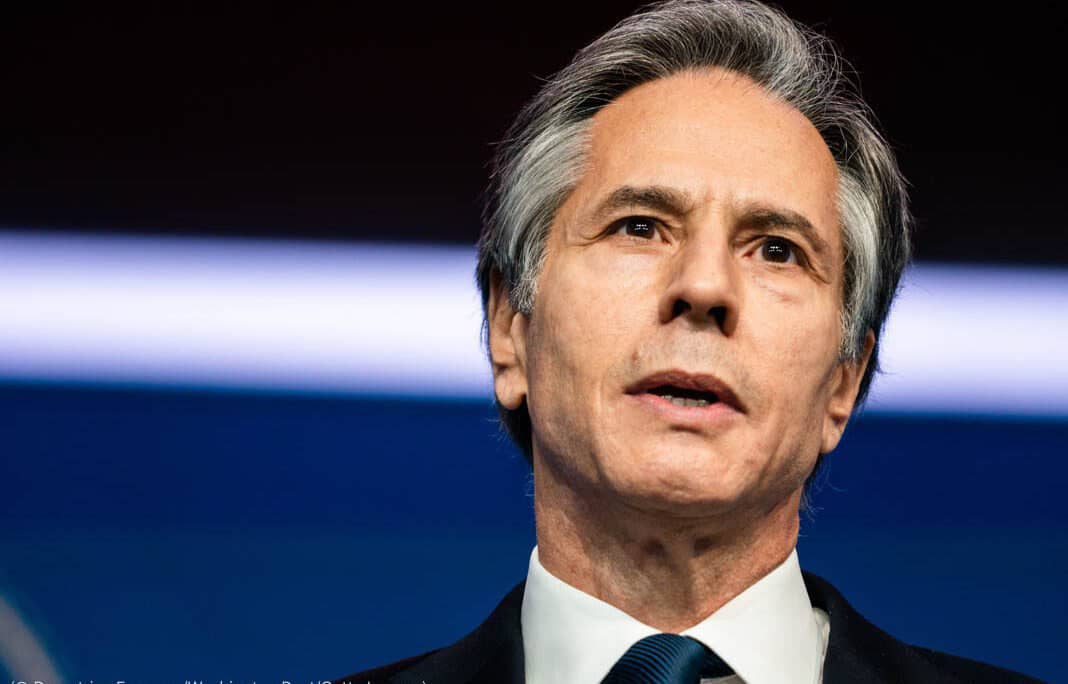 US officials told AP that the withdrawal may be completed in the next two weeks, which would be ahead of Joe Biden’s September 11 deadline to withdraw all troops from the country. The report stated that several hundred US forces will remain at the Kabul airport, at least until September, to assist Turkish troops who have agreed to provide security for the airport.

The officials stated that troops will remain until formal plans are in place for Turkey to secure Hamid Karzai International Airport, the main entry into Afghanistan. According to Pentagon press secretary John Kirby, security at the embassy in Kabul “would be beyond just what you would see in normal embassies. You should expect that it’ll be larger, in keeping with the security situation in Afghanistan.”

On the other hand, Pakistani Prime Minister Imran Khan said that Pakistan would want a civilized relationship with the US after it leaves Afghanistan, ending its longest war that comprises two decades. Khan stated this during his recent interview with The New York Times while discussing Pakistan’s future strategy after US leaves Afghanistan.

“After 9/11, Pakistan again opted to join the US war on terror. Now, after the US leaves Afghanistan, basically Pakistan would want a civilized relationship, which you have between nations, and we would like to improve our trading relationship with the US,” he said. When asked what he meant by a “civilized” relationship, PM Khan said that Pakistan desires “evenhanded” ties as the US has with India and the UK.

He added that Pakistan had always held a closer relationship with the US than neighboring India, adding that the both countries shared uneven relationship during the war on terror. He recalled that Pakistan lost 70,000 lives after joining the war that also caused losses to the tune of $150 billion. “The US kept expecting more from Pakistan. And unfortunately, Pakistani governments tried to deliver what they were not capable of,” he said. “What we want in the future is a relationship based on trust and common objectives. That’s actually what we have right now with the US — I mean, our objectives in Afghanistan are exactly the same today.”

He said, “Post the US withdrawal, I don’t know what sort of military relationship it will be. But right now, the relationship should be based on this common objective that there is a political solution in Afghanistan before the United States leaves because Pakistan doesn’t want a civil war, a bloody civil war in Afghanistan.”

Kabul: Acting Interior Minister Abdul Sattar Mirzakwal claimed on Saturday that the Taliban are trying to…

Kabul: Mutlaq Al-Qahtani, Qatar’s special envoy for counterterrorism and mediation of conflict resolution, said that a…