Kabul: Sources close to Marshal Abdul Rashid Dostum have confirmed on Sunday that he had been transferred to Turkey due to a “sudden illness”, but said that his condition has “improved” now.

The sources told BBC that he had spoken to some local commanders in Jawzjan last night about the security situation in the north of the country and called on them to mobilize against the Taliban. Enayatullah Farahmand, deputy head of the High Council for National Reconciliation and a close aide of Dostum, tweeted that he had called his soldiers and supporters to stand up to the Taliban and promised to return to Afghanistan soon.

Marshal Dostum has considerable influence in northern Afghanistan, especially in Faryab and Jawzjan provinces. Earlier, some media outlets reported his “poisoning” and his immediate transfer to a hospital in Turkey, but the news of his poisoning has not been confirmed by his relatives. 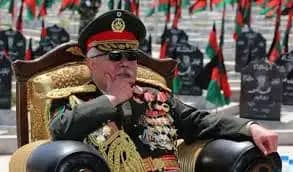 Meanwhile, in other news, the Attorney General’s Office (AGO) announced that two National Directorate of Security (NDS) officials have been sentenced to 5-10 year imprisonment, on suspicion of receiving $30,000 USD as bribe.

The AGO stated that the preliminary court of the Anti-Corruption Justice Center issued the sentence on Sunday. The AGO added that these individuals were arrested while receiving bribe in return for the release of a suspect, who had been arrested on suspicion of cooperating with the Taliban to assassinate government employees.