Kabul: Hundreds of residents of Injil district, Herat province, held a gathering to condemn Taliban’s violence and attacks, and stated that they will support the ANDSF against the Taliban.

District Governor Hafizullah Nab along with former jihadi commanders urged the public not to listen to Taliban propaganda, and added that they are responsible to support the current system and preserve the past achievements. Provincial Governor Abdul Saboor Qane said that the gathering and public mobilization sent a clear message to the Taliban that the war is illegitimate, and the Taliban must know that the people are opposed to the group. Qane called on the Taliban to stop violence, destroying roads and infrastructure, and extortion.

Ghulam Farooq Nazari, a representative of the people of Herat in the House of Representatives, told Hashte Subh daily that the people were tired of war and bloodshed and took up arms to support the defense and security forces to say no to the Taliban and other terrorist groups and to protect the achievements of the last two decades. In recent days, popular mobilizations have been mobilized in several provinces to fight the Taliban. The Ministry of National Defense has said that it manages the people’s mobilization forces.

The Badakhshan governor’s media office also quoted Ahmad Bashir Samim, the governor of the province, as saying that more than 400 people had taken up arms and moved to different parts of the city, Faizabad, without any concessions. The governor of Badakhshan called the people’s move “a confrontation with Taliban”. 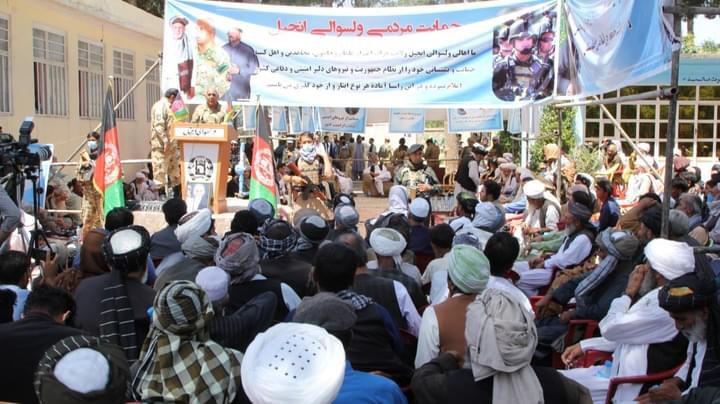 “The Taliban should know that they have no place among the people,” said the governor of Badakhshan. In recent days, after the fall of Khash and Arghankhah districts, the road from part of Badakhshan to the provincial capital has been closed and the Taliban have reached several kilometers from the center of Badakhshan.

Meanwhile, the Department of Refugees and Repatriations of Baghlan Province announced that about 8,000 families have been displaced in the past month due to the escalation of the conflict in the province. Sharifullah Shafaq, director of refugee affairs in Baghlan province, told Hashte Subh daily on Sunday that the families had been displaced from Nahrain, Baghlan-e Markazi, Baraka, Dahne Ghori and other insecure districts in the province.

Of the 8,000 displaced families in the past month, 1,000 have been assisted, Shafaq added.

According to the head of the Baghlan Refugee department, the survey and assistance process has been underway for a month now, and the department’s survey teams are surveying 7,000 families. He added that in the near future, with the completion of the survey, food and non-food aid will be distributed to these families. Meanwhile, as a result of heavy fighting in the past month, several districts in Baghlan have witnessed clashes between the government and the Taliban.

Meanwhile, the Afghanistan Independent Human Rights Commission (AIHRC) commemorated the 1st death anniversary of its two employees, Fatima Natasha Khalil and Ahmad Jawed Folad, who had been killed in an explosion in Kabul.

The AIHRC stated that relevant government authorities are yet to identify the perpetrators, and provide a full response on the investigation. The AIHRC expressed its regret that authorities have failed to address complaints about targeted killings of other media and civil rights activists, and human rights defenders.

The AIHRC added that the government must be accountable and effectively fight impunity, so that the human and citizen rights of all are fully protected. The AIHRC also called for an international fact-finding delegation appointed by the UN to investigate crimes against civilians, including targeted killings, attacks on ethnic and religious minorities, and educational institutions. The AIHRC urged the government to support the demand and cooperate in establishing this body and its investigation.