Kabul: The US Central Command announced on Wednesday that 896 C-17 loads of material have been airlifted out of Afghanistan.

The command also turned over 15,943 pieces of equipment to the Defense Logistics Agency for disposition. The command has completed “over 50 percent” of the retrograde of US forces from the country.

The end of the retrograde end will signify the end of the US combat mission in Afghanistan. The US mission will transition to protecting US diplomatic efforts in the nation and to establishing the bilateral relationship between the United States and Afghanistan. The only American forces that will be left in the country will be there to protect the US diplomatic presence, Pentagon Press Secretary John Kirby said.

Kirby would not put a number on the number of American troops that would remain to protect diplomats. “Afghanistan is not going to be treated like any other nation where we have … Marine security guard,” he said. “It’s Afghanistan and we understand the dynamic nature of the security threat there, so there will be some number of US troops.”

There will also be security at the Kabul airport to protect the diplomatic presence in the nation. “We are still working out some of the details of what the security situation is going to look like at the airport and how that’s going to be facilitated,” he said.

The Taliban is continuing attacks against Afghan government forces. “The violence is too high and … the security situation, certainly, is concerning over there,” Kirby said. “What’s important to say — and I’ll say it again — is that we want to see a peace process that’s credible and Afghan-led and leads to a negotiated settlement.” 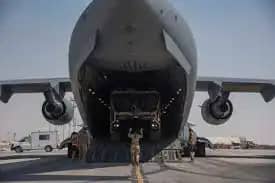 In fact, Taliban’s political office spokesman Mohammad Naeem told Radio Azadi, “We believe from the beginning that the problems be resolved through negotiations. We remain committed to intra-Afghan negotiation, which are not one-sided. If other sides are unwilling and insincere, efforts by one side will lead to nowhere.”

Naeem even spoke about the capture of districts and said, “The majority of districts joined the Taliban without any clashes. The capture of over 100 districts in a short period of time isn’t possible through fighting. We have been saying from the beginning that we’ll not allow anyone to use Afghan soil against any other countries. It’s our policy.”

Meanwhile, Afghanistan’s ambassador to India said that India should hold talks with those Taliban leaders who are willing to reconcile, believe in the reintegration process and have faith in the Afghan constitutional democratic framework. “We would want India’s strong messages to those Taliban elements who are reconcilable, who believe in the reintegration process back into Afghan society and hopefully become part of mainstream political life,” Farid Mamundzay said in an interview with India’s digital publication The Print.

“We would welcome India’s messages to the Taliban — to cut ties with regional terrorist groups, to let violence go, and to tell the Taliban to preserve the gains of the past 20 years and believe in a constitutional democratic framework,” Mamundzay said. India on Thursday said it is in contact with “various stakeholders” in Afghanistan.

“India supports all peace initiatives and has a long-term commitment towards the development and reconstruction of Afghanistan. In this context, we remain in touch with various stakeholders, including regional countries,” said Indian Ministry of External Affairs spokesperson Arindam Bagchi. Mamundzay also said that Kabul will not fall into the hands of the Taliban as US troops leave, even though intense fighting is going on in some parts of the war-torn country.

The Afghan people would not want to reverse the gains their society has made in the past two decades, he said. Mamundzay said that after the exit of all international troops from Afghanistan, Kabul would seek to enhance military-to-military cooperation with New Delhi. He said that the two countries have a “strategic partnership agreement.” However, Mamundzay ruled out Afghanistan asking for Indian military troops to be stationed there.

Meanwhile, Walsall will soon be home to 80 Afghans who supported British troops overseas, it has been revealed. The veterans, who served on the frontline, providing interpretation and translation services, will be relocated under a government-funded program.