Kabul: Italy has completed its troop pullout from Afghanistan, Rome announced on Wednesday, ending a 20-year deployment there as part of an accelerated withdrawal of NATO forces. Members of the US-backed alliance agreed in April to wrap up their 9,600-strong mission in Afghanistan after US President Joe Biden made the call to end Washington’s longest war.

“Last night, the Italian mission in Afghanistan officially ended,” Defense Minister Lorenzo Guerini said in a statement, after dozens of soldiers landed at Pisa’s international airport from Herat. “However, the international community’s commitment to Afghanistan, starting with Italy, does not end here. It will continue in other forms, from strengthening development cooperation to supporting Afghan republican institutions.” According to the ministry, 50,000 Italian soldiers were deployed to Afghanistan over the past 20 years after the 9/11 attacks prompted US and NATO involvement in the country. Rome has begun the process of bringing to Italy those Afghan citizens who helped Italian forces during the deployment. The army has identified 270 eligible people, while studying the cases of another 400. Eighty-two Afghans, most of them interpreters and their families, arrived at Rome’s Fiumicino Airport on June 14.

Over that period, 53 soldiers died and 723 were injured. Italy was one of the five countries most involved in Afghanistan along with the United States, Turkey, Britain and Germany as part of “Resolute Support.” This NATO-led non-combat mission aimed to train Afghan forces into ensuring their country’s security after the departure of foreign forces.

Even, the last 12 Czech soldiers stationed in Afghanistan as part of a NATO mission returned home on Sunday along with all equipment and supplies, the Czech Army has confirmed. Since 2002, in total more than 11,500 Czech soldiers served in the Allied mission to Afghanistan, mostly in field hospitals, as members of surveillance, chemical and biological protection units, or as part of surgical or reconstruction teams. Fourteen were killed or died while on duty there.

During a conference on security issues last week, Czech Prime Minister Andrej Babiš said that he was opposed to the withdrawal of NATO troops from Afghanistan, echoing a statement by President Miloš Zeman. Czech Foreign Minister Jakub Kulhánek (Social Democrats) has also questioned the move. 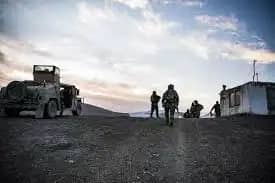 In fact, the UK RAF Puma detachment serving in Afghanistan in support of the NATO Resolute Support Mission since March 2015 has now returned to RAF Benson, as part of the withdrawal of NATO forces from the country. The three Puma helicopters and around 50 personnel from 33 Squadron and 230 Squadron based at Benson Joint Helicopter Command (JHC) that have been serving in Kabul have now returned to the UK. The aircraft were flown from Kabul to RAF Brize Norton on an Antonov AN-225. During Operation TORAL, the name given to the UK element of Resolute Support Mission, the Pumas were based at Kabul International Airport. From there, they were able to provide vital airborne transport to UK and NATO forces. This included transporting personnel and equipment around the different urban, mountainous and desert terrains in the Kabul area, as well as supporting the deployment of the NATO Security Quick Reaction Force as needed. Also, three homes in South Ayrshire will be made available to refugees from Afghanistan. The individuals, who had to flee Afghanistan for their own safety, will be offered to help staff who worked for the UK military mostly as interpreters in the country.

Germany too announced on Tuesday that all its troops had left Afghanistan as the largest pull-out, that of the United States, is ongoing. The withdrawal has fueled fears the Taliban could regain power in the country.

Nai said that the warring parties expect the media to provide information that favors them, and highlighted that the United Nations Security Council’s Resolution 1738 considered journalists, media, and associated personnel as civilians, who must be protected and respected.