Kabul: The Ministry of Information and Culture announced on Wednesday that the United Nations Educational, Scientific and Cultural Organization (UNESCO) has approved Afghanistan’s plan to include Herat province in the World Cultural Heritage List.

The Acting Minister of Information, Mohammad Taher Zaheer wrote on his Facebook page that a meeting of the Technical Coordination Committee for Afghanistan’s Cultural Heritage was held on Wednesday. According to him, the meeting was also attended by Harun Hakimi, Deputy Minister of Culture and Arts of the Ministry of Information and Culture, Director of Historic Preservation and National Museum, and Deputy Director of the Uzbek Embassy.

The Acting Minister added that the ministry’s plan to include the city of Herat in the UNESCO World Heritage List had been approved by the organization. According to him, UNESCO has assured the Ministry of Information and Culture that the province has been inscribed on the World Heritage List and asked it to provide the necessary documents in this area. 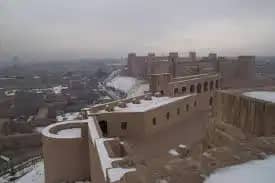 The Acting Minister welcomed UNESCO’s approval for the city of Herat to be included in the World Heritage List, and stressed that the necessary documents in this regard will be prepared and submitted to this institution. He noted that the city of Herat is important for the government of Afghanistan and the world with its historical monuments, especially the monuments of the Islamic period, and with the inclusion of this province in the list of world cultural heritage, the world’s attention on it will be more.

In addition, Zaheer noted that in a meeting held for this purpose at the Ministry of Information and Culture, Ajmal Maiwandi, head of the cultural department of the Aga Khan Foundation and one of the foundation’s engineers, said that the renovation of the fifth minaret in Herat had been completed.

The deputy head of the Uzbek embassy also assured his country’s preparations for the restoration of ” Amir Ali Shir Navai garden and tomb” and said that he was waiting for the approval of the Ministry of Information and Culture to start the project.