Kabul: To discuss the way forward for Afghanistan, Zalmay Khalilzad, the US Special Representative for Afghanistan, met President Mohammad Ashraf Ghani and Abdullah Abdullah, the chairman of High Council for National Reconciliation (HCNR), separately, on Sunday.

President Ghani and Khalilzad discussed the expansion of cooperation and the continuation of political, diplomatic, security, defense and economic relations. The US delegation stressed on the continuation of the $3.3 billion annual assistance to the Afghan security and defense forces, and the message of the US government in support of the security and defense forces, especially the forces, Air and the economic and human rights sectors.

The US delegation to Afghanistan has said that it is working to preserve and strengthen the achievements of the past two decades in order to achieve the desired goal of an independent, united, neutral, democratic and peaceful Afghanistan.

According to the Presidential Palace, the delegation will continue discussions with the Afghan government on supporting the security and defense forces and cooperating in the fields of human rights and economics in the coming days. Khalilzad also said that the United States is committed to fighting terrorism, supporting security and defense forces, and providing economic assistance to Afghanistan. 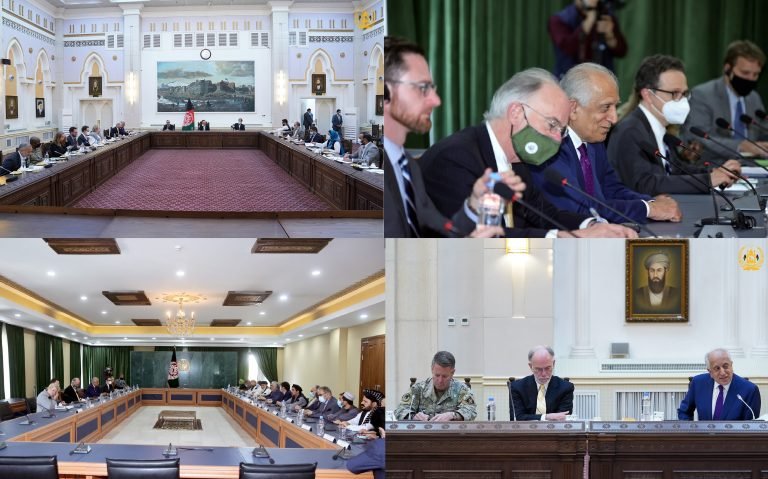 The US Special Envoy for Afghanistan has said that his country strongly supports the peace process and is working to build a global and regional consensus in support of peace efforts. Khalilzad said it was time for the parties involved to reduce the violence and start serious and fruitful talks.

According to the Presidential Palace, Khalilzad said in a meeting with Abdullah Abdullah and members of HCNR that he had come with his delegation to discuss a new chapter in cooperation and relations with Afghanistan.

During the meeting, Abdullah told Khalilzad, “You have constantly reiterated that we should focus on the new chapter of relations between the two countries. The Islamic Republic of Afghanistan has always been committed to peace; Because war is not the solution and our people should not fall victim to blind and meaningless wars any more. Take advantage of this opportunity to make peace.”

Abdullah Abdullah has stressed that neither side should miscalculate that it could end the current war by force. He added that the government is trying to form a national and political consensus at this critical juncture.

A new round of Khalilzad’s visit to Afghanistan with a delegation of several US agencies to the peace-related region of the country began on June 4. The delegation was also scheduled to travel to Doha.