Kabul: Emphasizing that the main challenge to consolidating a democracy and human rights in the country is war, the Afghanistan Independent Human Rights Commission (AIHRC) on Sunday celebrated its 19th year of establishment.

As per the AIHRC statement with the start of the peace process, the commission hoped that opportunities would be provided for an end to the war and for a comprehensive, just and lasting peace. However, the negotiation process has not yet been able to satisfy the people and the commission.

“Violence has not abated, the necessary trust has not been built between the parties to the conflict, the prospects for peace remain unclear, and the position of human rights in the negotiations has not been commensurate with the commission’s expectations,” the commission said.

The AIHRC is committed to upholding the constitution, values and democratic achievements of the Afghan people, especially women, and providing justice for the victims of war in order to achieve inclusive peace. According to the commission, women’s participation in peace talks is low and should be increased from 9% to at least 30%. 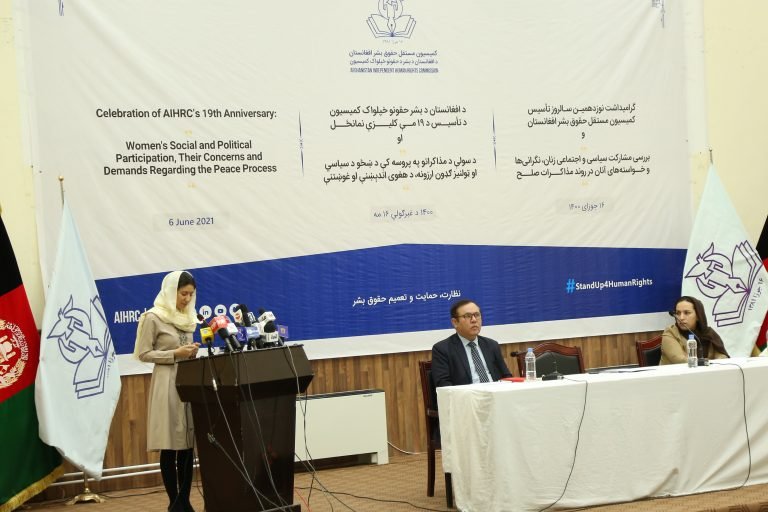 The AIHRC has also made proposals to the government, the Taliban and the international community in a document entitled “Examining Women’s Political and Social Participation, Their Concerns and Demands in the Peace Negotiation Process”.

It also urged the Taliban to respect women’s rights as enshrined in the Afghan constitution. Immediate cessation of killings and field trials of women, protection of girls’ right to education, ban on attacks on educational facilities, including schools and educational staff, were some of their other demands.

The AIHRC further calls on the international community to go beyond mere condemnation and to put on its agenda the principle of its responsibility to protect fundamental human rights treaties.