Kabul: Hundreds of residents of Faizabad city of Badakhshan province, protested against the lack of water, electricity supply and rising security incidents in the city.

The march started at 8am on Tuesday from Shahr-e-Naw Faizabad, and about a thousand protesters marched to the old city and the provincial office armed with sticks and clubs, chanted various slogans outside the gate of the Badakhshan governor’s office.

Nik Mohammad Nazari, spokesperson for the governor of Badakhshan, said angry demonstrators attacked soldiers and staff at the provincial office with stones and sticks in violation of civil principles, setting fire to petitions and a number of other government documents at booths outside the province. 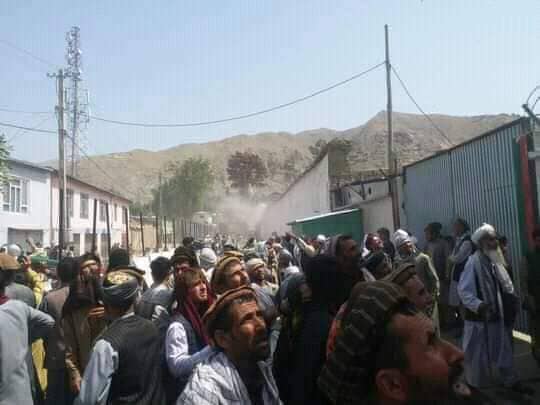 He said that in the fire, 2,000 petitions and documents of the people were burned and destroyed and a number of bodyguards of the provincial office were injured by the people.

Hamidullah Manqad Haydari, a member of the protest leadership, said that between 2,000 and 3,000 people had taken part in the demonstration, calling for drinking water supply, better security and the opening of the Shurabak dam.

Eight people were injured in the violence between the two sides. The demonstrators claim that the soldiers shot at them and wounded 16 people.

The protests are currently still underway.