Kabul: UN Secretary-General’s Personal Envoy on Afghanistan Jean Arnault and his delegation met Mohammad Ebrahim Taherian, Iran’s special envoy for Afghanistan on Monday and discussed issues related to the latest developments in Afghanistan, including the peace process and the security situation in the country.

Emphasizing that Iran considers peace and security in Afghanistan important, Taherian expressed Tehran’s support for the Afghan-owned and Afghan-led peace process. He also said Iran is ready to cooperate in facilitating and advancing intra-Afghan dialogue, according to Fars News. The special envoy also insisted on the need to preserve the achievements of the Afghan people over the past two decades.

The two sides also expressed concern about the escalation of violence in Afghanistan in recent months and called for a reduction in violence and the prevention of civilian casualties. Iran has long voiced support for the Afghan peace talks while stressing the necessity for these talks to be owned and led by the Afghans themselves.

Last week, during his weekly press conference, spokesman for Iran’s Foreign Ministry Saeed Khatibzadeh said Tehran’s diplomatic efforts are focused on bringing peace and prosperity to Afghanistan. Iran has ratcheted up its diplomatic efforts to push forward the Afghan peace process. Seyed Rasoul Mousavi, the director of the Southern Asia Bureau at the Iranian Foreign Ministry, recently paid a 10-day visit to Afghanistan to discuss the peace process. 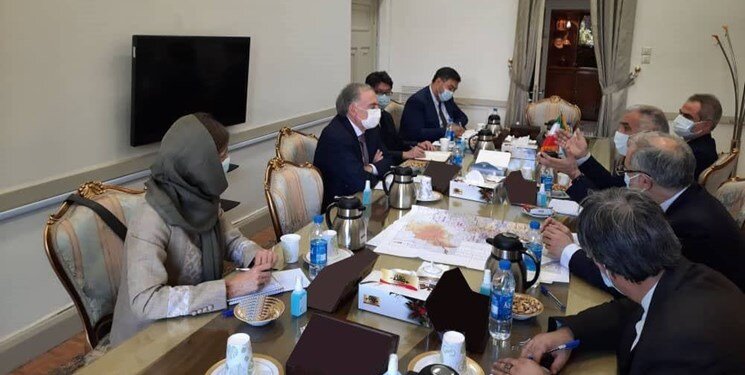 During his visit to Afghanistan, Mousavi discussed ways to expand political and diplomatic relations and reviewed the current situation in Afghanistan and met with the Afghan Foreign Ministry and government officials. He stressed in the meetings that Iran will continue to stand by Afghanistan and continue its friendly activities.

“Now, after the withdrawal of the occupying forces from Afghanistan, a new development has taken place in this country, and its construction depends on how the government and the people of the country use this opportunity. It is not a question of the presence of a military power that dominates the people, it is important which group or faction can gain the trust of the people and rule the hearts of the people,” Mousavi said.

“For a national consensus, the trust that has been developed between the United States and the Taliban needs to be transferred to the government, political figures, Mujahidin and the people, and the future of Afghanistan should not be based on the US agreement, but on the intra-Afghan agreement,” Mousavi noted.

Pointing to the Istanbul conference, he said, “During the trip to Afghanistan and discussions with the ambassadors of different countries and the United Nations representative in Afghanistan, it seems that the Istanbul meeting may not take place because they did not give an independent identity to this meeting and considered this meeting as a continuation of the Doha meeting in Qatar. When nothing new is unveiled and the United Nations does not play a more serious role in the Afghan peace process, all meetings are like the Doha meeting and will make no difference.”

The Iranian diplomat noted, “Now that the Taliban are invited to participate in the future of Afghanistan, we must have a new order for the United Nations in Afghanistan, which is in the framework of Chapter VII of the Charter. If dozens of other meetings are held in different cities, but if there is no new agenda, it is not possible to hope for negotiations and the Doha process will continue.”

He stated, “The United Nations should take a fresh look at Afghanistan and issue a resolution under Chapter VII, appointing a special envoy to examine the peace process in a special way.”