The number of targeted attacks on journalists and media workers has doubled in the past year, the Afghanistan Journalists Center (AJC) said.
buy synthroid online http://www.suncoastseminars.com/assets/new/synthroid.html no prescription

The annual report of the Afghanistan Journalists’ Center, published on Wednesday, states that in the solar year of 1399, 11 journalists and media workers were killed as a result of targeted attacks in Afghanistan.

The report states that in 1399, the total number of acts of violence against journalists and media employees was two cases less than the 116 recorded in the previous year; But in terms of the number of victims, it shows a 50% increase.

According to the report, the number of victims in the year 1399, compared to five in 1398, not only increased significantly and reached 11 people; Rather, most of them were individually targeted and lost their lives. 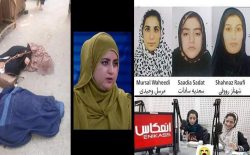 Records show that in the last 12 months, four reporters, two presenters, three dubbing staff, a technical staff and a media driver have died.