Speaking at the ceremony for introducing Nilab Mubarez as the new head of the Afghan Red Crescent on Tuesday, Mr Danesh said that peace was a two-way process and that no trust will be formed in the peace process until the other side and its supporters made a serious decision, take practical and meaningful steps and accept the ceasefire.

According to him, the Afghan government has so far taken the necessary steps to show its goodwill in the peace process and is fully prepared to discuss a variety of issues; But the Taliban have carried out more attacks since the beginning of the process, killing civilians, women, Ulema, human rights activists, journalists and civil society activists. 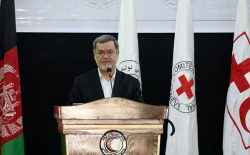 Mr. Danesh emphasized that the Government of Afghanistan supports a peace that is just and lasting and guarantees the continuity of the constitution and the achievements of the Afghan people over the last twenty years.

He added that the Afghan government continues to welcome any reasonable peace plan, but only on condition that it does not cause the country to collapse and return to its dark past.