Afghanistan Islamic Republic Peace Negotiations Team says Fatima Gailani a member of the team, participated in an online panel discussion on ‘Inclusivity and Diversity in the Afghanistan Peace Process, which waas organized by AWEC1991 and UNwomenafghan.

IRA Peace Negotiations Team in a press release said, a study on women’s active role, especially local women peacebuilders, in the Afghanistan peace process and peacebuilding, conducted by these two institutions, was introduced.

Ms. Gailani said at the meeting that the studies conducted in the field of peacebuilding would open a clear window for everyone to better understand the situation and capacities in the country. 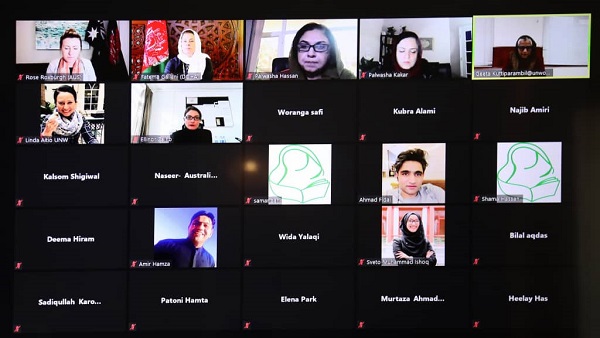 Ms. Gilani praised women’s resilience in the face of problems facing this part of society.

Fatima Gailani stressed the important role of women in Islamic countries in the Afghan peace process and the support of Afghan women, saying: “Peace makes sense with the active presence of women, as human rights and women’s rights, war victims’ and minorities’ rights must be acceptable to all parties and should be preserved in the process. She added we would work hard and fight bravely in this regard.

Ms. Gailani mentioned the ongoing and extensive relationship of the negotiation team with women in the country and around the world. She called the support of the international community important and valuable for Afghan women.