During the meeting, Mr. Rahmani said that strengthening and expanding good inter-parliamentary relations could have an impact on the relations between governments and nations.

He stated that Afghanistan and Tajikistan have ancient historical ties and religious and linguistic commonalities, and that political and geographical borders have never been able to separate the two countries.

The Speaker of Afghan Lower House noted that the Taliban and other terrorist groups are active in Afghanistan with the support of a number of countries in the region and the intelligence agenciagencies of neighbouring countries. 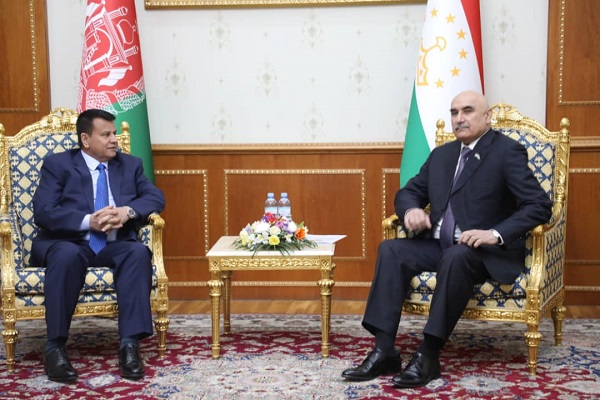 According to him, these groups have spread war and insecurity through targeted killings and assassinations across Afghanistan.

Rahmani emphasized that Afghanistan has become a geography of proxy wars and the countries of the region are using their proxy groups to fight against the Afghan people and government.

Rahmani cited that the only way to prevent the spread of terrorism and extremist thinking in the region is to unite these countries.

He added that the Taliban did not seek to establish peace and end the war in Afghanistan, but to seize the country through war and violence.

Rahmani also said the Taliban had not yet presented any plans for peace in Afghanistan and had abandoned the negotiating table for no good reason.

In the meantime, Tajik Parliament Speaker Mohammad Taher Zakerzada said that the development and relations of bilateral cooperation between Afghanistan and Tajikistan have always been in the focus of their President.

He added that talks on finding a beneficial path to global peace and stability in Afghanistan and the development of relations between the two countries in various fields are among Tajikistan’s demands.

Mr. Zakirzada stressed that the policy of the Tajik government has always been to expand good relations with neighboring countries, especially Afghanistan, and the President has stated this in his official speeches and statements.

The speaker Tajik House of Representatives called for the expansion of economic and trade relations between Kabul and Dushanbe, noting that the volume of trade between the two countries reached $ 70 million last year.