Kabul: Warning the government that they will not allow any airplane to land or take off from Faryab, the protesters who entered the fifth day of protests on Wednesday, stated that the government has still not met their demands, as per reports from Salam Watandar.

Residents of Faryab and supporters of the National Islamic Movement of Afghanistan have been protesting against the appointment of Mohammad Daud Laghmani, the newly introduced governor of Faryab.

Ehsanullah Qawanch, head of the Faryab youth movement, said that a number of MPs wanted to come to Maimana from Mazar-e-Sharif to join the protesters, but had not been allowed to travel by the government. According to him, that is why they went to the Maimana airport and did not allow any plane to land in the city.

The head of the Faryab youth movement also warned that a number of delegations are scheduled to enter the city of Maimana to take the entrance exam, and that the plane carrying them will not be allowed to land.

Hamidullah Khairandish, an activist of the National Islamic Movement of Afghanistan in Kabul, posted a picture on his Facebook page: “We wanted to go to Faryab, the land route is closed by the Taliban and the air route by the Republic.” 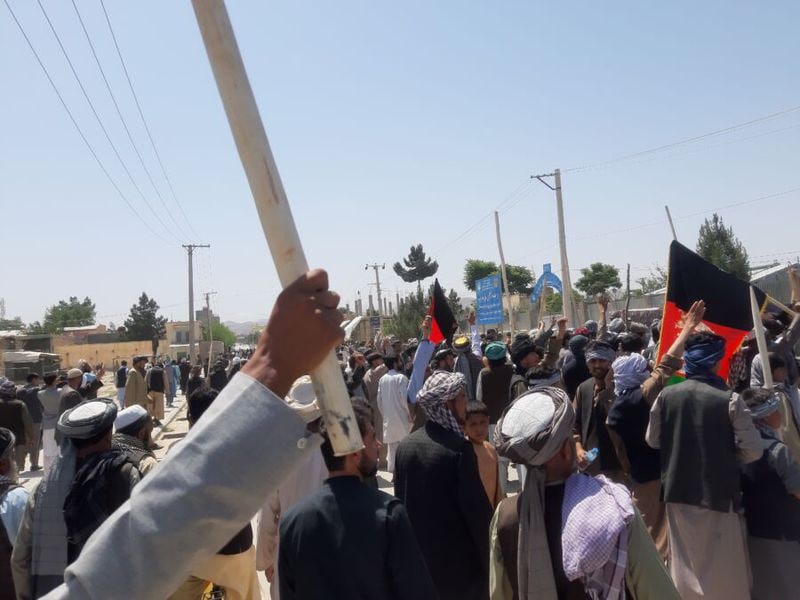 Sayed Zinuddin Abedi, head of Faryab Civil Society, said the government should respond satisfactorily to the legitimate demands of the people and not disrupt the relative situation in the province. He also called on the protesters to proceed peacefully and open the gates of government offices.

Meanwhile, Rahmatullah Turkestani, chairman of the Faryab People’s Council, convened a meeting and called on the government and protesters to resolve their problems through understanding.

Meanwhile, the Speaker of the House of Representatives also expressed concern over the continuing of people’s protests against the new governor of Faryab. Mir Rahman Rahmani called on the government, and the influential officials in Faryab to put an end to this “tense” situation and “the concerns of the people.”

Mir Rahman Rahmani emphasizes that governors do not have sufficient “administrative and financial” powers and only exercise the powers delegated to them by the government. The Speaker of the House of Representatives pointed out that this kind of governance, on the one hand, undermines local talents and, on the other hand, weakens governance. He called for more powers to be given to governors.

Also, the provincial security committee meet was held under the chairmanship of Mohammad Daud, the governor of the Faryab province on Wednesday. In this meeting, security problems and the opinions of security officials were examined.