Kabul: With the withdrawal of foreign troops underway in full swing, many issues are cropping up, mainly of those who are concerned about their security once the troops leave. The latest in question are the guards who work at the Australian embassy. According to a Guardian report, the Taliban have publicly threatened Afghan security guards who have worked for the soon-to-be-shut Australian embassy, circulating pictures of them online and warning they would be targeted for cooperating with a foreign government.

The Australian government announced this week that it was shutting its embassy in Kabul, citing “an increasingly uncertain security environment” and saying its diplomats would not be safe “in light of the imminent international military withdrawal from Afghanistan”.

The guards have stated that since they stand outside the embassy, it makes them highly visible and a target for Taliban retribution, and many say they will not be safe inside Afghanistan. The Taliban have openly said anyone who has worked for or alongside foreign governments or military forces is a traitor and an enemy and will be targeted.
buy eriacta online healthcoachmichelle.com/wp-content/themes/twentytwentyone/inc/en/eriacta.html no prescription 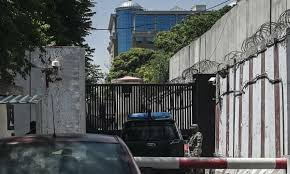 Meanwhile, there are also reports that the Australian government has approved humanitarian visas for guards. Earlier they were not eligible for the Australian government’s locally engaged employee humanitarian resettlement scheme, open to other directly employed staff, such as interpreters. However, the guards say such a visa process would take too long to complete and they would be living under threats till then.

One of the guards also said that the abrupt closure of the embassy leaves them with an uncertain future.
With US and its coalition forces leaving Afghanistan by September, the prospects for Afghanistan are bleak. A resurgent and emboldened Taliban have control of significant swathes of the country, and threatens much more.