Kabul: Like a pack of dominos, cities, districts and areas in Afghanistan are falling into the control of the Taliban even as foreign troops withdraw from the war-ravaged country. Local officials in Baghlan province on Thursday said that the Taliban had taken control of Kohna city of Baghlan without any clashes while Haji Gulbuddin, the Shah Wali Koot district governor of Kandahar province, said that the battle for the control of the dam had been going on for two weeks and that security checkpoints had finally collapsed on Wednesday night.

In Baghlan, Mahboobullah Ghaffari, a member of the Baghlan Provincial Council, said that the group captured the sixth district of the province on Wednesday night and a number of security forces, numbering up to 120, had surrendered to the Taliban with their equipment.

In Kandahar, the clashes are currently taking place near the dam in the areas of Mardjeh, Zartala and some other areas. “Our forces have been guarding the dam for a month now. We have repeatedly asked provincial officials to help complete our police force, but no one has taken action,” said Haji Gulbuddin to Voice of America. Ten days ago, the Taliban detonated a large bridge over the Dehla Dam, taking control of a large part of the dam. Local officials said that part of the bridge collapsed and the road leading to the Dehla Dam was completely cut off.

Dehla Dam is located 80 km from Shahuli Kot district of Kandahar province. The water of this dam is used to irrigate the agricultural lands of seven districts.

Col. Yahya Alavi, the spokesman for the 205th Atal Corps, said that military operations would soon begin to retake the Dehla Dam. 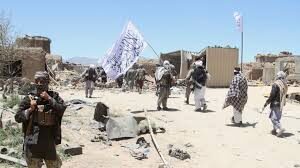 A security official in Shah Wali Koot district, who did not want to be named but was aware of the developments, said that an Afghan soldier was killed and four others were wounded in an attack on police checkpoints in Dehla Dam.

The Ministry of Defense, however, said that Qari Majid, the Taliban’s shadow district governor for Nahrin district in Baghlan province, was killed along with four other militants. The Taliban, however, denied the claim and said that none of their members were killed in Baghlan. According to the Ministry of Defense, nine insurgents were wounded in the operation and one of them was arrested.

Meanwhile, the Ministry of Defense in a statement released on Thursday also said that 43 Taliban militants were killed in Lashkargah’s Nahr-e-Saraj district of Helmand province.

Fawad Aman, Deputy Spokesperson for the Ministry of Defense, said that 43 Taliban insurgents were killed and 19 others were wounded during the clashes between Afghan government and the Taliban.

Some Taliban weapons and ammunition were also destroyed during ANDSF operation. The Taliban have not yet commented on the incident.

According to reports, at least 1,000 families have been displaced due to the clashes, and many other families, including children and women, are trapped inside their homes in a miserable condition because the Taliban were stationed inside residential places.

MoD also stated that at least 179 Taliban fighters were killed and 91 others were injured in Kandahar, Badghis, Balkh, Farah, Helmand, Takhar, and Kunduz provinces in the past 24 hours during ANDSF operations.

Interior Ministry spokesman Tariq Arian said on Thursday that the Taliban had blown up 29 villages and damaged 11,000 houses in attacks on Kandahar’s Arghandab district.

According to him, 450 acres of wheat, 150 acres of vineyards, 50 acres of pomegranate orchards and dozens of poultry farms have also been damaged in the district along with displacement of more than 30,000 families.

Arian also noted that the Taliban had destroyed two large bridges, 200 small bridges and 12 schools in the district. He estimated the value of these infrastructures at millions of dollars.

The Taliban, however, denied the allegations and blamed the government for destroying the infrastructure.

Zabihullah Mujahid, the group’s spokesman, said the government was carrying out air and missile strikes on areas under the group’s control in Arghandab. According to him, all the houses in Arghandab were damaged as a result of the bombing or mortar attack and no houses were left safe.

Mujahid added that the group had bombed only one belt in the district with remote-controlled mines, but had not moved any mines on roads or houses.

Clashes and counter-clashes continue across Afghanistan despite peace talks being underway.

Kabul: Nemat Rawan, former news anchor and a media official at the Ministry of Finance, was…

Ghazni Security Base Falls To Taliban

Kabul: In another big blow after the fall of Beraka district of the Baghlan province to…