Kabul: With the foreign troops withdrawing, Taliban has increased its violent take overs of area across seven provinces over the past week, but the defense and security forces have thwarted many of their plans and caused heavy casualties to the Taliban, said Hamdullah Mohib, the national security adviser, in a joint press conference of the top brass of security officials in Afghanistan on Saturday.

Emphasizing that the Taliban do not want peace and wish to seize power by force, Mohib called on the insurgents to drop their weapons and not sacrifice themselves for an “illegitimate war”. “If the Taliban takes over, its recapture will result in widespread Taliban casualties. The Taliban insurgents should know that “your leaders are abusing you and the war is illegitimate and you should not sacrifice yourself for the sake of your leaders,” Mohib said. The national security adviser stressed at the press conference that the Taliban only had the ability to target electricity pylons, suicide attacks and mosque bombings.

On the rising violence in the country, Acting Defence Minister Yasin Zia said that fighting has intensified over the last few days in many provinces, including Helmand, Kandhar, Farah and Ghazni. Zia added that Afghan forces are advancing slowly as Taliban are using civilian houses “as shield”. He said that 1,000 Taliban fighters have been killed and wounded in Kandahar, Helmand, Baghlan, Farah, and Ghazni provinces. Zia said the Taliban had been hit hard. According to him, the bodies that were recovered by the security forces show that al-Qaeda is present in the ranks of the Taliban.

In fact, on the Logar car bombing, Ahmad Zia Siraj, director-general of the Afghan National Directorate of Security (NDS) said that the Haqqani Network was behind the attack and one arrest has been made. He also spoke about the release of prisoners and said that most of the prisoners released by the Taliban are civilians and that no decision has been taken yet on the release of Taliban prisoners as those released have re-joined the war.

Mohib also said that efforts are underway for holding the Istanbul conference and progress about the peace conference will be announced after Eid ul-Fitr, adding that a Pakistani military delegation will soon visit Kabul. Mohib also added that international pressure has increased on Pakistan to stop supporting terrorists. 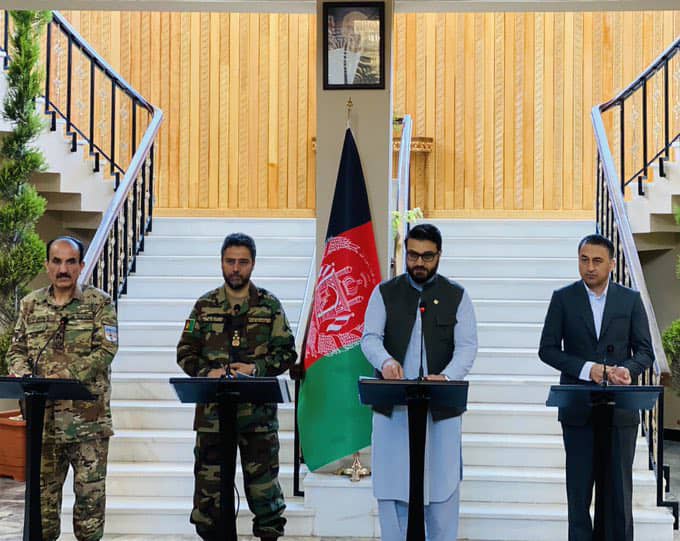 Meanwhile, NSA Mohib also said that the health of National Defense Minister Assadullah Khalid has improved and he would resume duty after Eid al-Fitr.

Meanwhile, intense fighting is taking place in Baghlan, Ghazni, Kandahar and Helmand provinces. Government forces in some provinces have countered Taliban attacks, as per the Ministry of Defense.

These battles have displaced a large number of the country’s citizens in the areas under conflict. MoD in a recent tweet said 250 militants and insurgents were killed and further 106 others were wounded across Afghanistan.

The ministry further added, ANDSF also discovered and neutralized 29 various types of landmines and IEDs placed to target civilians and security force members in the regions.

Afghan Military’s commando forces have retaken the Dahan-e-Ghori district in northern Baghlan province as fierce battles continue in the region. Security sources told media that Afghan commando reinforcements were deployed and three outposts fallen to the Taliban were recaptured.

Reports indicate that the Taliban also attacked Nahrin district in Baghlan province on Friday night, but the attacks were rebuffed by the Afghan National Defense and Security forces. On Friday, Afghan military’s commando units have launched air and ground offensives on the Taliban in Baghlan-e-Markazi in Baghlan province. According to security sources, at least 27 Taliban militants were so far killed in the Baghlan operations.

This comes as the Ministry of Defense denied Taliban claims of ‘surrendered 200 Afghan troops’ in Baghlan-e-Markazi, and added that 17 Taliban were killed during the operations.

Meanwhile, Ahmad Zia Siraj, the director general of national security, also added that all “enemy” psychological warfare activities, especially on social media, were being launched from Pakistan. “Wherever you go, we operate and you either die or you are imprisoned; So it is better to lay down your arms and start a normal life,” he said.