Kabul: In a grim development for all of Afghanistan, explosions caused by a car bomb and mortars outside a school in the Afghan capital, Kabul, on Saturday killed at least 55 people and wounded over 150, mostly female students, officials said.

Senior security official said that most of the casualties were students who were coming out of the Sayed ul Shuhada school, and many were badly wounded, undergoing treatment at hospitals. Footage on social media showed chaotic scenes, with books and school bags strewn across a bloodstained road, and residents rushing to help victims.

“It was a car bomb blast that occurred in front of the school entrance,” an eyewitness said. He said all, but seven or eight of the victims, were schoolgirls heading home.

Najiba Arian, spokeswoman for the Ministry of Education, said that at the school, girls and boys come to study in three different shifts, the second slot is for female students. The wounded were mostly female students, she added.

Tariq Arian, spokesperson for the interior ministry, said that the toll could increase further. “I do not know what country we are in… We want peace and security,” a grieving relative of one of the victims told Reuters.

The killing of innocent schoolchildren comes even as the withdrawal of international troops is underway. President Ashraf Ghani blamed the attack on the Taliban insurgents as Kabul was on high alert since US President Joe Biden’s announcement to pullout troops and Afghan officials on Saturday had held a press conference stating that the Taliban had stepped up attacks across the country following the announcement. President Ashraf Ghani too stated that the Taliban by intensifying violence once again showed that they have no interest in peaceful solution to the current crisis and are seeking to complicate the situation.

However, no group has claimed responsibility for Saturday’s attack. Taliban spokesman Zabihullah Mujahid denied the group was involved and condemned the incident. 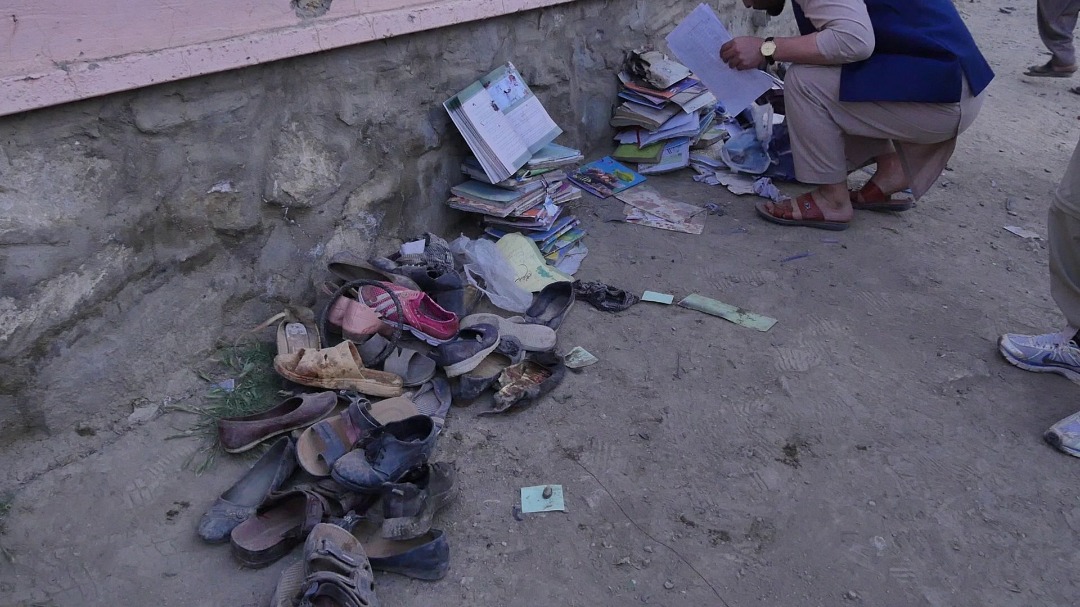 UNICEF strongly condemned the horrific attack and said, “Violence in or around schools is never acceptable. Schools must be havens of peace where children can play, learn and socialize safely. Children must never be the target of violence. UNICEF continues to call on all parties to the conflict to adhere to international human rights and humanitarian law and ensure the safety and protection of all children,” UNICEF stated.

“Girls in Afghanistan have the right to pursue an education free from violence. My thoughts are with the brave women and girls of Afghanistan who inspire the world and must be supported in the weeks, months, and years to come,” said the US deputy Secretary of State Wendy R. Sherman.

Australian embassy in Afghanistan also offered condolences for Saturday’s attack on a school in PD13 of Kabul and said that it was a terrible reminder of the violence faced by innocent Afghans.

Canadian ambassador to Afghanistan Ried Sirrs said, “Safe access to education is essential for society and necessary for the future of Afghanistan; children of all genders and ethnicities should never be targets of such unjustifiable violence.”

French embassy in Kabul too offered condolences and called it a horrendous attack. “Committing such an act of barbarism against children reaches the lowest point of humanity,” the embassy said.

US State Department also condemned the attack near a girls’ school in Kabul, Afghanistan. “We offer our condolences to the victims, many of whom were children, and their families. We call for an immediate end to violence and the senseless targeting of innocent civilians. We will continue to support and partner with the people of Afghanistan, who are determined to see to it that the gains of the past two decades aren’t erased,” read the statement.

Stefano Pontecorvo, NATO civilian representative to Afghanistan, said, “Saturday’s terrorist attack in Dasht-I-Barchi, Kabul, is a cowardly, repulsive attack on the Afghan people who will remember who keeps the violence at unacceptable levels creating the conditions for these heinous actions.”

The UN family in Afghanistan too expressed its deep revulsion at Saturday’s blasts in Dasht-I-Barchi Kabul, calling it an atrocity, said UNAMA.

EU Spokesperson also mourned with those who have lost loved ones in the latest horrendous terrorist attack in Afghanistan. The targeting of civilians, including schoolchildren in a bomb attack is a blatant and despicable violation of international humanitarian law. “We condemn this attack in the strongest possible terms. Those responsible must be held to account, and those that support their actions should feel total shame. The attack is an attack not only on the Afghan population, but on all those worldwide that respect the equal rights of women,” EU added.

The European Union has consistently called for an immediate ceasefire in Afghanistan, in which a lasting peace can be achieved through an inclusive, negotiated political settlement among Afghans. Our priority remains to support a prosperous, stable and secure Afghanistan, the statement added.