Afghan first Vice President Amrullah Saleh called Hezb-e-Islami leader Gulbuddin Hekmatyar’s warning about the fall of the government and the siege of the Presidential Palace as a “political joke.”

Hekmatyar on Sunday warned that if the agreement between Hezb-e-Islami and the government not implemented, he would surround the Presidential Palace with mass demonstrations and would lead the Arg officials with the fate of People’s Democratic Party of Afghanistan (PDPA).

Hekmatyar accused the government of stoning the peace process, saying it was importing arms from regional countries and distributing them to anti-Taliban commanders to prepare for war. 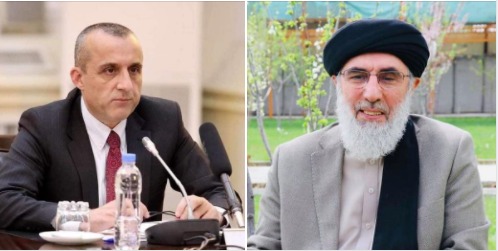 Reacting to the remarks, Amrullah Saleh said that the government did not need to smuggle weapons.

According to Saleh, the government has always met and continues to meet its weapons needs in a clear and legitimate manner.

Saleh added that arms procurement is the responsibility of the president, and he determines the final interest from which authority to buy.

Referring to another part of Hekmatyar’s speech, the first Vice President said Hekmatyar had put most of his efforts to engage with anti-Afghan circles but still failed to reach the Presidential Palace.