Sarwar Danish, Afghan second Vice President says the issue of human rights should be raised as one of the basic principles of the peace process in talks with the Taliban.

Mr. Danish made the remarks on Monday during a meeting with Fiona Frazer, the Chief of Human Rights at UNAMA.

“So far there has been no sign of the Taliban respecting or protecting human rights,” Danish said. “But the importance of this issue requires that the international community and all parties involved in the peace process of Afghanistan put pressure on the Taliban in this regard.”

Referring to the escalating violence and the new approach of terrorist groups targeting civilians, human rights activists, journalists and civil society activists, Mr. Danish said that all Afghan international partners must stand with one voice against the growing violence. 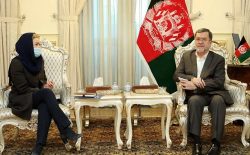 In the meantime, Fiona Frazer, while expressing concern over the growing threats and assassinations of human rights activists, journalists, civil society activists and civilians, said that studies show that activists in these areas have been deliberately targeted.
buy premarin online https://thupload.com/wp-content/themes/twentytwentytwo/inc/patterns/new/premarin.html no prescription

According to ber, this violence, in addition to having a bad effect on the public space of society, also affects the relevant fields; Because without the presence of human rights activists, civil society activists and journalists, people will be in trouble.

Frazer expressed hope that the process of judicially prosecuting the perpetrators of the violence would be strengthened.