Protestors in the capitals of U.S. and U.K. took to the streets on Sunday, demanding justice for Afghan migrants and refugees who were killed in two separate incidents in Iran since May.

The protestors used the now viral hashtags #AfghanLivesMatter and #I Am Burning as they spoke against the car fire that killed three in Iran’s Yazd province and the Harirud incident where 49 Afghan migrants were thrown into a river along the border.

In Washington D.C., U.S. protestors marched, recited poetry against oppression and requested the relevant authorities to not let the incident pass without punishing the culprits. 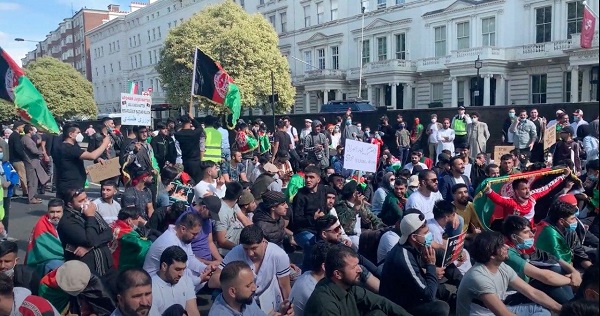 Thousands in London, U.K., rallied outside the Iranian embassy chanting slogans and condemning the “barbaric” actions against Afghans. The three-hour protests also saw requests for international authorities to step in and probe the incidents.

The Afghan government had setup an investigation panel however it yielded no results with the officials claiming that human traffickers were to blame for the drowning incident while the driver of the car was held responsible for the car fire.

Tehran’s foreign ministry raised concerns about similar protests outside the Iranian embassy in Kabul and summoned the Afghan envoy to Iran Abdul Ghafoor Liwal, to lodge a formal protest against the demonstrations.

The Afghan Ministry of Foreign Affairs reacted and said theu would be sending an official delegation to Iran to resolve the tensions.