A Chinese Foreign Ministry’s Spokesperson on Monday welcomed the peace agreement signed between the United States and Taliban in Doha and said that it was important for a political settlement of the Afghan issue.

“China welcomes the signing of the deal between the US and Afghan Taliban. We think it is important for a political settlement of the Afghan issue,” Zhao Lijian said during his regular briefing while responding to a question about the deal that sets the stage to end the nearly two-decades-old conflict in Afghanistan.

The agreement lays out a timetable for the final withdrawal of the United States troops from Afghanistan.

The spokesperson said that China firmly supported the Afghan-led, Afghan-owned, broad and comprehensive and inclusive peace and reconciliation process.

“We hope, taking this as an opportunity, the seed of peace can grow and prosper in Afghanistan,” he added.

Zhao Lijian said that the foreign troops in Afghanistan should withdraw in an orderly and responsible manner to ensure a smooth transition and void a security vacuum especially prevent the terrorist groups from growing stronger in Afghanistan.

He remarked that in the meantime, the international community should continue to support and participate in the peaceful reconstruction process in Afghanistan. 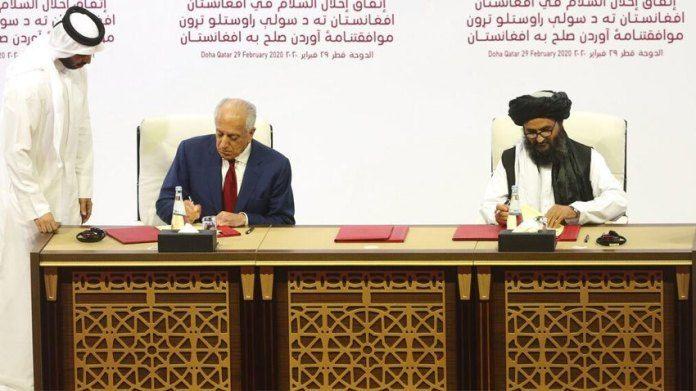 “We call on the Taliban and all parties in Afghanistan to seize the opportunity and start intra-Afghan talks as soon as possible to discuss political and security arrangements acceptable to all and make joint efforts for lasting peace and stability in Afghanistan,” he added.

He said that China would continue to work with international community to support and help the Afghan peace and reconciliation process.

While commenting on the Afghan government’s joint statement with the US issued on February 29 in Kabul, the same day when the US and Taliban signed a peace deal, he said that representatives of foreign missions in Afghanistan including China and some international and regional organizations attended the ceremony.

Zhao Lijian reiterated that the Chinese side supported the Afghan government, Afghan Taliban and all parties in Afghanistan in starting and advancing intra-afghan talks as soon as possible.

“On the basis of respecting the will of all parties in Afghanistan, China will like to continue to be a supporter, mediator and convenience provider for the peace and reconciliation process in Afghanistan and will continue to play a constructive role,” he added.