The Afghan President Ashraf Ghani has met with a delegation of US Congress members led by the House Speaker Nancy Pelosi, the Presidential Palace- ARG said.

“During the meeting, President Ghani praised the continued US financial and political support and assistance to Afghanistan over the past 18 years and emphasized that US-Afghanistan partnership has been sustainable and will remain sustainable”, the Presidential Palace said in a statement.
buy levaquin online https://mb2dental.com/wp-content/themes/twentytwenty/inc/new/levaquin.html no prescription

“We (Afghanistan) want U.S. support for Afghanistan and for expanding relations between the two countries in various areas, especially in the security sector,” the presidential palace quoted Ghani as saying in a statement. 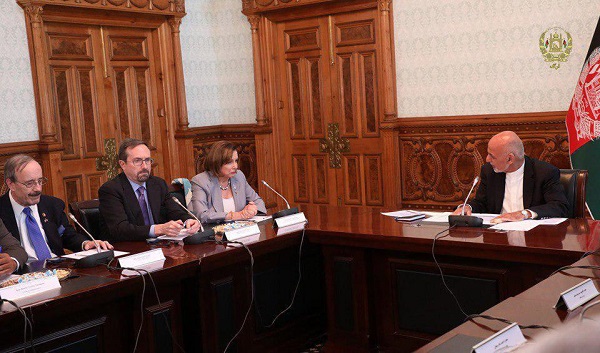 President declared that peace was a priority and the peace process should be led and owned by the Afghans and it should protect constitutional values and women’s rights.

During the meeting US House Speaker Nancy Pelosi also said, “The reason for our presence in Afghanistan is that the Taliban once hosted terrorists in Afghanistan who attacked us and we won’t let the country to become a safe haven for terrorists again.”

Pelosi declared that maintaining the achievements and protecting the rights of Afghan women is one of the priorities of the US Congress and the US House of Representatives respects the accomplishments, commitments and priorities of Afghanistan as well as its national interests and efforts to maintain a long-term friendship with the United States.