The US special representatives for Afghanistan reconciliation, Zalmay Khalilzad met President Ashraf Ghani to brief him on the latest round of negotiations with the Taliban, an official said.

The spokesman of President’s office, Sediq Sediqqi confirmed that the meeting took place on Sunday night at the Presidential Palace (ARG).

The US envoy Khalilzad arrived to Kabul from Qatar yesterday afternoon. 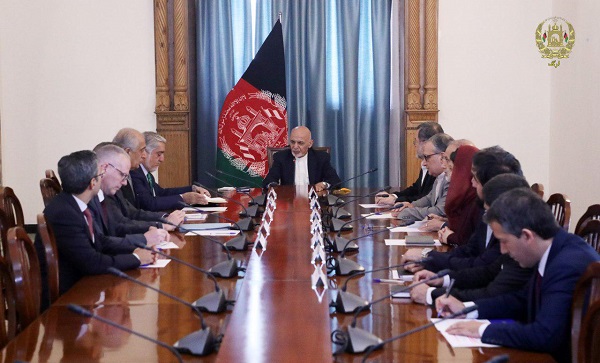 In Qatar, Khalilzad had held the ninth round of talks with the Taliban, which ended without a final agreement. ARG soon will release details, Sediqqi said.

“We are at the threshold of an agreement that will reduce violence and open the door for Afghans to sit together to negotiate an honourable and sustainable peace.” said Khalilzad, even as Taliban insurgents targeted the northern city of Kunduz, killing civilians and security forces in a triple-pronged attack to overrun it.

The nine rounds of talks between the US and Taliban officials have been punctuated on each occasion by violence outside the negotiating room.
buy amoxil online http://www.biop.cz/slimbox/extra/new/amoxil.html no prescription

Key to the discussions is the withdrawal of US forces. The Taliban, in exchange, are expected to promise that international terrorist groups will not be allowed to thrive on Afghan soil.