Security officials have reported that more than three dozen terrorists have been killed or wounded across many provinces of Afghanistan.

As a result of the invasive, airborne and cleanup operations of the security forces over the past 24 hours in the provinces of Helmand, Nangarhar, Nimroz, Sar-e-Pul, Badakhshan, Ghazni, Kandahar, Logar, Kunduz, Herat, Baghlan, Badakhshan and Uruzgan, 45 terrorists were killed and six others wounded. 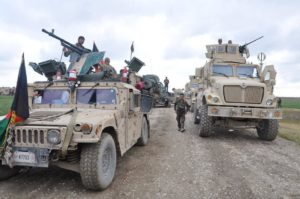 The statement added that during these operations, a significant amount of ammunition and explosives belonging to the terrorists were destroyed.

President Ghani, at the third National Mayors Conference held on Monday, called the consolidation of state…

In a match against Nepal on Monday, Afghanistan U-19 cricket team defeated Nepal to advance into…