The US and NATO’s Resolute Support Commander in Afghanistan Gen. Austin S. Miller has answered a very common question the foreign forces have been asked. Addressing the question as to the reason behind presence of his forces, he replied that the answer is Reconciliation between Afghan government and Taliban.

The US Department of Defense came out with Gen Miller’s statement which said “The war has continued for 17 years. NATO and coalition forces are in for the long haul, and the Taliban cannot hope to wait out the coalition. The smart option is to reconcile and rebuild Afghanistan together.
buy premarin online https://clinicaorthodontics.com/wp-content/themes/twentynineteen/inc/new/premarin.html no prescription 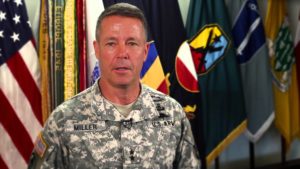 Gen. Miller also cleared out that other terrorist outfits like Deash, al Qaida and others have no role whatsoever in new Afghanistan.

These statements come as US and NATO forces have offered their cooperation and support for the upcoming parliamentary elections next month.