Some sources have announced the appointment of a new Afghan ambassador to Pakistan.

Relevant sources in the Afghan government told the BBC that Shokrullah Atef Mashal was appointed as a new ambassador to Pakistan. 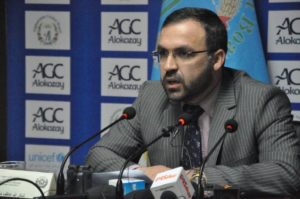 Mr. Mashal is the successor to Omar Zakhilwal, the former ambassador of Afghanistan in Islamabad.

Previously, Mr. Mashal was the head of Afghanistan’s Cricket Board.