Kabul: The future of Afghanistan should not be a return to the past and there is a definite need to ensure double peace in the country, which means peace inside and peace outside the borders in the region, said Indian Foreign Minister S Jaishankar said on Friday.
buy amoxicillin online http://www.suncoastseminars.com/assets/new/amoxicillin.html no prescription

Jaishankar’s comments come after US and NATO announced withdrawal of their troops from the war-ravaged country by September 11. “We have always believed that this should be an Afghan-led, Afghan-owned and Afghan-controlled process,” added Jaishankar, saying that the future should be democratic and with the will of the people.

“The international community should take care not to throw the baby out with the bathwater,” he warned while addressing a panel on the future of Afghanistan at the Raisina Dialogue, which was attended by Afghan NSA Hamdullah Mohib and Iranian foreign minister Javad Zarif.

On Taliban, Jaishankar said, “The situation is evolving and everybody wants to make the best contribution that they can and shape the outcomes in Afghanistan as positively as they can. So, anybody responsible would consider all the aspects of that.” Iranian foreign minister Javad Zarif said the outfit should be a part of the peace process in Afghanistan, but it should not “control” the process. Taliban, he said, should abandon violence and work in the peace process within the Afghan constitution.

MEA also issued a statement on Afghanistan saying, “Any political settlement should be inclusive and should preserve the socio-economic and political gains of the past 19 years. India supports a united, democratic and sovereign Afghanistan. We are deeply concerned about the increase in violence and targeted killings in Afghanistan. India has called for an immediate and comprehensive ceasefire. The Chief of the Defence Staff in India General Bipin Rawat on Thursday said that he is concerned about a vacuum developing in Afghanistan after the planned US and NATO troop withdrawal from the war-ravaged country.

General Bipin Rawat told a security conference that the worry was that “disruptors” can step into the space created by the withdrawal of foreign troops from Afghanistan. He declined to name the countries that could act as disruptors. 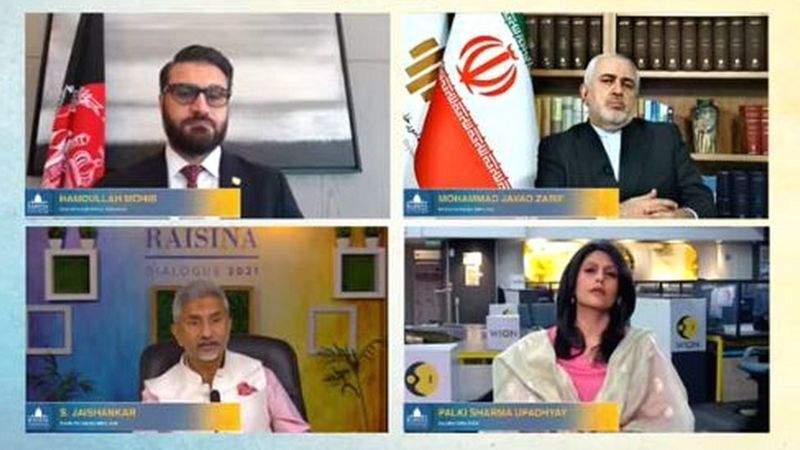 “Regional countries, especially India, will have tremendous concerns about the US pullout from Afghanistan and the likelihood of a Taliban resurgence in the country,” Lisa Curtis, who was Deputy Assistant to the President and NSC Senior Director for South and Central Asia from 2017-2021 under the previous Donald Trump administration told PTI. “When the Taliban controlled Afghanistan in the late 1990s, they welcomed militants and terrorists of all stripes to train, recruit, and fundraise from Afghanistan. Many of those militants, including the Lashkar-e-Taiba and Jaish-e-Mohammad, trained for operations in India, such as the 2001 attack on the Indian parliament,” Curtis said.

Meanwhile, Iranian Foreign Minister Mohammad Javad Zarif added that Iran and regional countries will not allow Afghanistan to go back to the status of 1990s.

Zarif said that the US exist from Afghanistan is “a positive move” but the Taliban should not use this opportunity to increase violence. He added that Iran welcomes the “responsible withdrawal” of the US forces from Afghanistan and believes that the presence of foreign forces has never been beneficial to the security of the region and Afghanistan.

He noted that the Taliban should use this opportunity to instantly begin serious talks with the Afghan government, adding that the Taliban cannot wait for the vacuum to arise because they want to take advantage of this vacuum and bring Afghanistan into civil war.

There is growing concern that a hasty exit from Afghanistan could leave the country in disarray and that a civil war could take place. There is increase in violence as the Afghan government and the Taliban are involved in clashes and counter-clashes ahead of the Istanbul Summit. There are increasing concerns from human rights group about civilian casualties in the country.

The US, UN and Qatar are planning a peace summit in Istanbul with the Afghan government and the Taliban to chalk out a future roadmap for the country. Taliban has refused to participate in any peace talks till the troops have been withdrawn, while the Afghan government is ready with a unified peace plan for the April 24 summit.