The Ministry of Defense (MoD) said the Afghan National Defence and Security Forces (ANDSF) conducted military exercises in Goshta district of Nangarhar near the Durand Line on Friday, in the presence of General Yasin Zia, the Chief of General Staff of the Afghan Armed Forces.

The MoD said the ground forces, commandos, strike forces, border guards and the Afghan Air Force were involved in the exercise in the Gosro area and demonstrated their capabilities by using light and heavy weapons.

Zia said that the purpose of holding this manoeuvre was to show the capabilities of the armed forces to the people and “friends and enemies” of the country. 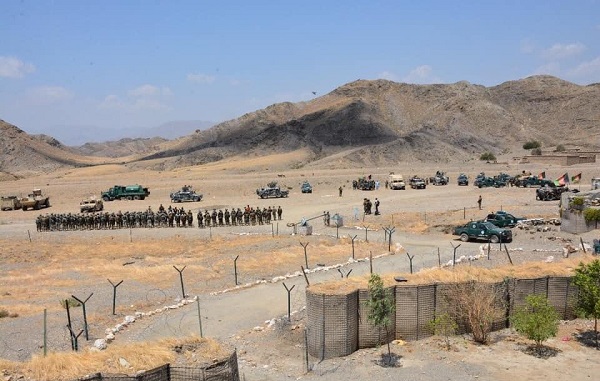 “Our message to the people of Afghanistan and our foreign friends is: The Afghan National Defence and Security Forces have high capacity and combat capability and professionalism, and they can be confident that these forces can defend the Afghans and the territorial integrity of Afghanistan,” Zia said.

“The enemies of Afghanistan should know that they are facing invincible, extremely capable and brave forces, and they will be destroyed if they do not stop fighting and violence,” he added.

The military exercise took place near the Durand Line as recent border clashes between Afghan and Pakistani troops erupted in Kandahar’s Spin Boldak area and in Kunar province.

On Friday, residents of Nangarhar, Kunar and Laghman provinces held a rally calling on the central government to clarify Pakistan’s construction of gates and laying of barbed wire along the Durand Line.

Pakistan has been accused of constructing unlawful installations on Afghan soil, but the Pakistani Foreign Ministry has called it in accordance with international law.

The preliminary Intra-Afghan talks that were expected to start from Sunday have been postponed indefinitely, a…