The construction activity of Pashdan Dam in Herat province has resumed after a gap of three years, the Ministry of Energy and Water said.

The construction of the dam was halted three years ago in 2015 by when, 30% of the project was completed. The halt was due to reasons which not revealed by the Ministry of Energy and Water. However, officials of the ministry recently emphasise that insecurity was one of the main reasons for the halt in the construction work of the project.

Pashdan Dam is situated in Karokh district of Herat and the dam project will be completed within the next three years, assured an in charge of the project from the ministry Abdullah Qazizada. 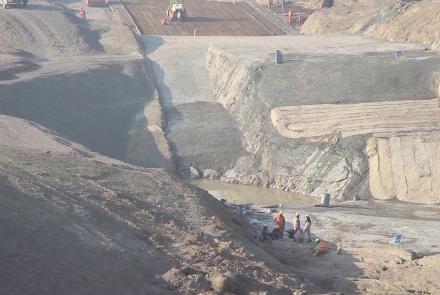 Mr Qazizada explained that two foreign companies (one of which is from Azerbaijan) and one Afghan company are handling the construction of the dam,
“The intention is that this project should be completed 100 percent in accordance international norms,” said Qazizada as he told some
Foreign experts are also promoting the dam.

“Because of the speed and development of the work to finish the work of this dam early, we work 15 hours in two times, which is 10 hours from the day and five hours from the night,” said Alexander Franchuk representative of an Azerbaijani company, which works on the project.

“We are doing our best. So far, we have not faced with any problems or security incident in the area,” ensured Mohammad Arif, Commander Pashdan Protection Unit.