Afghanistan National Security Adviser (NSA) Hamdullah Mohib says the Taliban do not want peace, instead they want an absolute power in the country.

Speaking at a press conference on Saturday, NSA Moheb said: “We have taken all necessary steps to bring peace and we are waiting for the Taliban to prove they want it too. However, seeking an absolute power does not mean peace.”

According to Mohib, the peace talks are currently deadlocked due to the Taliban’s reluctance and unwillingness to make peace.

“The Taliban were the losers in 2020,” Moheb said. “Everyone was waiting to see the changes in this group; But because they are just engaged in the war, they have been in politics. Today they are all ready for war. If the Taliban still wants to make peace, our team is ready.
buy amoxicillin online www.mydentalplace.com/wp-content/themes/twentytwelve/inc/en/amoxicillin.html no prescription 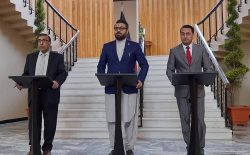 The second round of peace talks began in Qatar at least a month and a half ago; But since then, no formal meeting has been held between the two sides. During this time, the Taliban delegation has traveled to Iran, Russia and Turkmenistan.

The National Security Adviser also said that the Afghan government expected the violence to decrease with the release of Taliban prisoners; But this expectation was not met and therefore the re-release of the Taliban inmates will have no effect on the peace process.

In the meantime, Ahmad Zia Siraj, the Director of National Directorate of Security (NDS) said at the press conference that 224 people had been detained by the NDS forces in the past week, including 130 accused of involvement in terrorist activities.