Afghan President Ashraf Ghani says that an interim government will not be established in Afghanistan as long as he alive.

“As long as I live, they (Taliban) will not see the interim government,” said President Ghani, speaking to a number of victims” family members of security and defense forces on Saturday.

He stated that the Taliban’s request for an interim government was only to confuse the public. 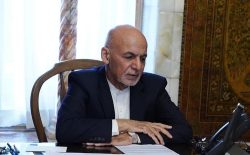 This comes as the Taliban delegation recently spoke about the creation of a new Islamic government during a trip to Tehran and Moscow.

Abbas Stanekzai, the deputy head of the Taliban delegation that headed a delegation to Russia a few days ago, said the current government led by Ashraf Ghani is a major obstacle to peace in Afghanistan.

According to him, if President Ghani ousts from power, peace will be established in Afghanistan.

Reacting to Stanekzai’s remarks, the Presidential Palace said that no system other than the Republic of Afghanistan is acceptable to the people of Afghanistan.
buy aciphex online http://www.handrehab.us/images/patterns/new/aciphex.html no prescription