US President Joe Biden issued an executive order on Friday to review the Special Immigrant Visa (SIV) program for Afghan combat translators who helped the U.S. military, a program with tens of thousands of backlogged requests.

A White House release said the order would review practices to ensure the U.S. was honoring its commitment to helpful allies in war-torn countries, to expand the program and enhance access to the program for those vulnerable to persecution, including women, children and those who could be discriminated against for gender or sexual orientation. 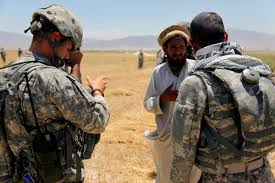 About 17,000 Afghan translators or others who helped the U.S. abroad are currently seeking special visas to resettle in the U.S., fearing retaliation from the Taliban and other terror groups.
buy lasix online http://www.biop.cz/slimbox/extra/new/lasix.html no prescription

With immediate family members who would come too, the number increases to about 70,000 Afghans, according to The Washington Post.

The average wait time for a translator to make it through the 14-step program to obtain a visa is three years, and in December, more than 1,000 Afghan and Iraqi interpreters signed a petition pleading with Biden to simplify the process.