Kabul: The Ministry of Defense (MoD) announced on Saturday that it has recaptured Ali Abad district in Kunduz province.

The MoD stated that the ANDSF cleared Ali Abad district bazaar during an operation, and inflicted heavy casualties to the Taliban.

On the other hand, the former commander of the 203rd Thunder Army Corps, Jalaluddin Yaftali, travelled to Badakhshan province to fight the Taliban, after resigning from his position. Yaftali stated that he extended his resignation to the president on the day when the Taliban attacked the province, and thanked the president for approving his resignation. Yaftali said that he loves all Afghanistan; however, his birth place was attacked and that he would fight to repel “aggressors.”

Yaftali called on elders in the province to support him against the Taliban. Yaftali warned that anyone who preaches in favor of the Taliban will be thrown into the Kokcha River, and urged local residents to get ready and not to allow former President Burhanuddin Rabbani’s stronghold be invaded. Yaftali gave assurances that he has adequate facilities, including money and airplane, as the central government has pledged to support him against the Taliban.

However, Farah’s provincial council member Khair Mohammad Noorzai told Hashte Subh daily that the Taliban captured Shaikh Abu Nasr Farahi Port on Friday night. Noorzai added that the border crossing is the 2nd largest commercial port in Afghanistan, whose closure will have negative impact on the revenues of the province and central government, as all food and non-food items, including fuel, are imported through the port.

Local sources in Herat province also reported that fall of Islam Qala and Torghundi border crossings to the Taliban, but the provincial officials have yet to comment on the report. Spokesman for the Ministry of Interior (MoI) Tariq Arian said that security officials are present in the area, but not on duty. Arian added that the MoI plans to eliminate threats, and implement measures to retake and suppress the Taliban and their infiltrators.

Spokesman for the Ministry of Industry and Commerce Ahmad Fawad Ahmadi said that the border crossings will not remain in Taliban control long, as Herat’s provincial officials have pledged to retake the Islam Qala port soon, to normalize imports and exports. Ahmadi warned that if the situation remains instable, it will have negative impact on the transfer of goods, imports, and exports. Spokesman for the Ministry of Finance (MoF) Mohammad Rafi Tabe accused the Taliban of attacking Islam Qala port to disrupt Afghanistan’s economic ties with Central Asia. Tabe added that MoF leadership has discussed the issues with security agencies and the situation will soon become normal.

Meanwhile, security sources in Kandahar province confirmed that two civilians were killed in an explosion which targeted the convoy of Pir Mohammad, the district governor of Daman district in Kandahar province. Jamal Nasser Barakzai, a spokesman for the Kandahar Police, told Etilaatroz that the incident took place at around 9:30am on Saturday in the Ghara area of Kandahar’s PD5.

Barakzai added that three other civilians, including a woman, had been injured in the blast. He stressed that Daman district governor was not harmed in the incident. The spokesman for the Kandahar police command did not elaborate, but said police are investigating how the blast occurred. No individual or group has claimed responsibility for the attack.

Also, Kabul Police Headquarters confirmed that two civilians were killed in an explosion inside a property dealer shop in Kabul. Ferdaws Faramarz, a spokesman for the Kabul Police, said the incident took place at around 9:10am on Saturday in the Karte Naw area in the PD8 of Kabul. Faramarz added that four other people had been injured in the blast. He explained that the incident was caused by an explosion of embedded explosives placed inside the shop. No individual or group has claimed responsibility for the attack. 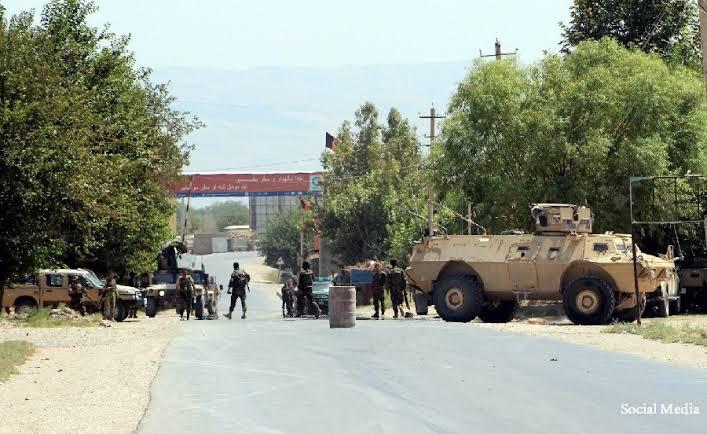 On the other hand, Takhar’s provincial police confirm that a prominent people’s uprising commander, Agha Gul Qataghani, in the province has been killed while fighting the Taliban. Qataghani was wounded during clashes on the outskirts of Taloqan city on Friday afternoon, and later succumbed to his injuries at the hospital. Provincial Police Spokesman Khalil Asir said that Qataghani has previously worked as Taloqan city mayor and provincial police chief, who was a prominent commander against the Taliban and Soviet.

This comes even as President Ashraf Ghani visited various parts of Bagram Airport, whose responsibilities have been transferred to the Afghan security and defense forces after the withdrawal of international forces. The President said that the transfer and relocation of equipment at Bagram Airport, an inter-ministerial team of the Security Sector should conduct an investigation to determine the movable and immovable equipment and after prioritization, the necessary measures will be taken in this regard.

Also, Afghan National Security Adviser Hamdullah Mohib announced on Friday that Afghanistan welcomes any technical, anti-terrorism operation support from external partners, including the militaries of Russia, China and India. However, any external assistance should not interfere with internal Afghan government matters, Mohib emphasized.

This comes even as Jowzjan’s provincial repatriation and refugee directorate reported that over 4,000 families have been displaced in the province due to the escalation in violence, over the past month. Repatriation and Refugee Director Abdul Malek Rustami told Hashte Subh daily that those displaced from Aqcha, Fayzabad, and Mardyan districts, from villages across the Jowzjan to Sar-e Pul highway, Sar-e Pul and Faryab provinces have sought shelter in Sheberghan city. Rustami added that 2,200 families have so far been identified, and 652 families received assistance; however, the lack of a specific place for those displaced remains a major challenge, along with security issues, and the lack of facilities, personnel and transportation facilities to address the problems of those displaced.

Also, the Afghan Independent Human Rights Commission (AIHRC) has expressed concern over the continuing violence and war in the country and called on the warring parties to come to the negotiating table to end the suffering of the Afghan people. The rights body said on Friday evening, that the unprecedented spread of war and escalation of violence in the country has resulted in the death of hundreds of civilians, displacement of thousands, deprivation of the right to travel, lack of access to shelter, food, health services.

The Independent Human Rights Commission added that road closures in parts of the provinces have led to shortages and rising food prices. According to the commission, along with this unemployment, the destruction and looting of people’s property and the destruction of public facilities has caused more poverty and deprivation of the people, which is extremely painful and worrying. It has stated that in the current situation, nothing is more important than acting on the will of the people and stopping the war. The AIHRC added that the people are the main victims of the violence and that if the parties, especially the Taliban, respect the will of the people, they must end the suffering by ending the war and returning to the negotiating table.