Kabul: The Ministry of Public Health (MoPH) recorded 813 new positive cases of the coronavirus (COVID-19) infection and 86 deaths in the past 24 hours.

This comes even as more than 1.4 million doses of the Johnson & Johnson COVID-19 vaccine arrived in Afghanistan, the United Nation’s Children’s Emergency Fund (UNICEF) said on Friday. Donated by the United States to COVAX, the 1,484,900 doses were delivered through the COVAX facility’s dose-sharing scheme to the government of Afghanistan, UNICEF said in a statement. This is the first of two vaccine consignments to arrive this month, bringing the total donation to around 3.3 million doses. The Ministry of Public Health (MoPH) announced the start of delivering J&J vaccine, in Kabul and some other provinces. Deputy MoPH Spokesman Mirwais Alizai said that the Ministry prioritizes vulnerable individuals, those above 55 years of age, individuals with chronic or persistent disease, those who work in crowded area, particularly with concerned clients, school and university teachers and professors, students above 18, internally displaced persons, journalists, and healthcare personnel. Alizai hoped that the next shipment of the vaccine will arrive in Afghanistan by the end of July.

Meanwhile, looking at the increase in cases, MoHP extended the quarantine period until July 23. As per the guidelines – All wedding halls and conferences will remain closed for another 2 weeks (July 23), and the municipalities are required to cooperate in this regard; all citizens are expected not to go to crowded areas, out of their home, and use facemasks in case of emergency; the public and private agencies, which have a large number of clients, should observe social distancing of minimum 1.5 meters; municipalities across the country should identify crowded areas, and implement clear mechanisms to control the situation and organize social distancing; all unnecessary meetings at public and private agencies should be avoided; all mullah imams and worshippers are requested to observe a distance of at least 1.5 meters during prayers, perform congregational prayers in open spaces, or leave windows for open to pass through; drivers and passengers of public vehicles must wear masks and ventilate the vehicles; in order to prevent the spread of COVID-19 in confined prison settings, visits to detainees should be suspended until further notice; all government employees over 55 or those suffering from chronic diseases (diabetes, heart disease, cancer, or women with over 4 months of pregnancy) should work from home; all swimming pools, public baths, sauna, sports complexes and competitions should be closed for another 2 weeks and the municipalities and other relevant agencies should control it; all security agencies and other authorities are requested to prevent gatherings, where social distancing is ignored; restaurants should provide services by observing social distancing of 1.5 meters between clients, enable proper ventilation, and try to serve clients in open spaces. Municipalities should seriously control and cooperate in this regard; condolence ceremonies should be halted in closed spaces and all citizens are requested to observe personal hygiene, including repeatedly washing hands with soap, using facemasks in crowded areas, and social distancing of 1.5 meters. Take the virus seriously to avoid searching for treatment and oxygen at the hospitals.

Meanwhile, the World Health Organization said health care is under siege in Afghanistan as the United States accelerates its troop withdrawal from the country. Afghanistan is one of the largest and longest-standing humanitarian emergencies in the world. The country is subject to almost every type of hazard — an escalating conflict, a rapidly spreading pandemic and most recently a severe drought. The WHO said 18.4 million Afghans need humanitarian assistance — a situation that has serious health consequences. It said increasing violence has led to more civilian trauma cases. 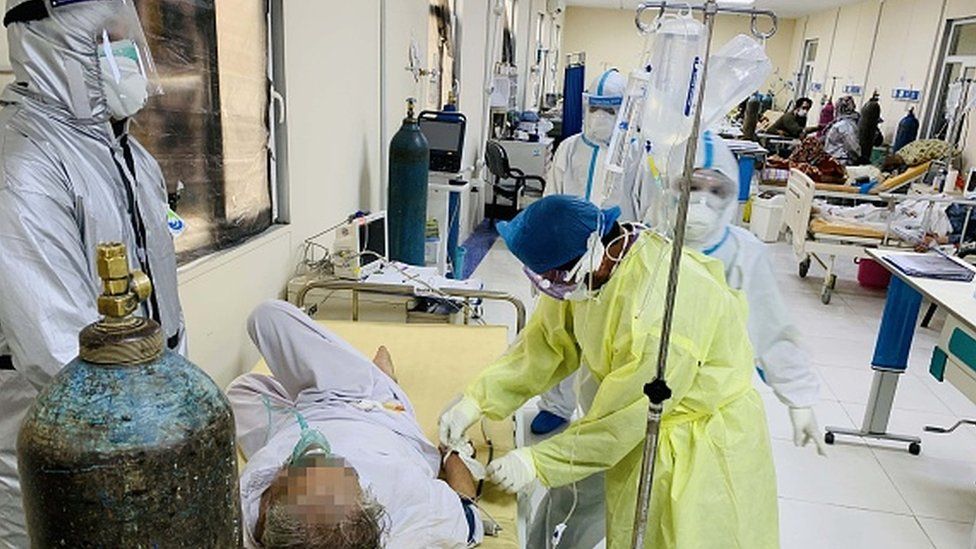 The regional director for the WHO Eastern Mediterranean Regional Office, Rick Brennan, said there has been a 29% increase in civilian casualties in the first quarter of this year compared with the same period last year. He said the arrival of people with complex war-related injuries is putting an enormous strain on health workers and facilities. “Moreover, this year there have been 30 attacks on health care across the country, including the total destruction of an immunization center late last month and a reported artillery attack on a health center in Kunar province just two days ago,” Brennan said. “Such attacks are a violation of the right to health. They limit people’s access to health care at a time of increased need and they contravene international humanitarian law.”

Increasing instability has coincided with the quicker than expected pullout of American troops from the country. Brennan described the current situation as fluid, fast-moving and terribly concerning. He said many health care workers have left their posts because of security concerns, though some reportedly were starting to return.

“I think it is a mixed picture right now. But we are clearly concerned of declining access to health care. … We are concerned about our lack of access to be able to provide essential medicines and supplies and we are concerned about attacks on health care,” Brennan said. Brennan said the WHO is not in direct communication with the Taliban. However, he said the WHO has received indirect requests to continue to provide health services in districts taken over by the Taliban. He said he believes the WHO has a good reputation, particularly in areas where it has run polio vaccination campaigns. That, he added, is likely to be instrumental in the WHO’s ability to maintain a field presence in those areas.

Also, as per the Oxfam report, a year of COVID-19 witnessed a 17% rise in extreme hunger in Afghanistan. As per the report, the country remains the third most food insecure in the world, closely behind Yemen, with 13.2 million people – or 42 % of its total population – facing acute hunger. “The second wave of the virus, compounded by a surge in violence due to the US troop withdrawal, resulted in major loss of business, informal employment, massive displacements, and a sharp drop in remittances. Against this backdrop, La Niña-fuelled drought has worsened during the Winter and Spring seasons, decimating farmers’ crops and making food more scarce compared to average years,” stated the report.

As a result, people’s purchasing power has declined by nearly 20%, particularly as casual labourers and pastoralists lost their daily income during the pandemic. Decreased remittances have also driven people into crippling debt. Since March 2020, Oxfam has supported nearly 100,000 of the most vulnerable people in Herat, Diakundi, and Nangahar provinces with cash to buy essentials and food. To prevent the spread of COVID-19, Oxfam has also provided hygiene kits and hand washing facilities and delivered health awareness campaigns.